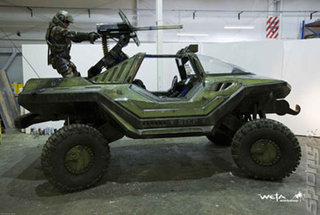 SPOnG has been chatting with the special effects wizards over at Peter Jackson's Weta Workshop in New Zealand of late. We've been quizzing them a little more about their superb work on putting together the Warthogs (pictured) and other speciality costumes and effects for Weta-man Neill Blomkamp?s series of Halo short movies, the latest of which is available right now to view at the bottom of this very story.

We'll be bringing you more from Weta shortly. In the meantime, while SPOnG gets ready for tonight?s Halo 3 launch shenanigans in central London, it?s nice to be reminded that a full, feature lengthy, Halo movie is still in the works - as is de rigueur for any modern, self-respecting triple-A gaming franchise. Neill Blomkamp once again directs - the movie will be produced by everyone?s favourite bearded fantasist and Weta boss, Peter Jackson.

Let's see if the movies join the games in providing more funds to Robbie Bach's Entertainment and Devices (A.K.A. Xbox) division, which finally looking like it is going to turn a profit for the first time ever if predictions of Halo 3 sales are anything to go on.

We are informed that Neill Blomkamp?s "unique skill as a filmmaker is the ability to seamlessly mix CGI special effects into a naturalistic, hand-held documentary style" - though his experience to date has mainly been in producing advertising shorts. You probably know of him through Citroen?s recent Transformers-inspired walking car campaign.

The Kiwi director has certainly hit the big-time landing the Halo project, which carries a rumoured budget of $135 million, with a number of scripts already submitted to date by writers Alex Garland, D. B. Weiss and, most recently, Josh Olson (A History of Violence).

RiseFromYourGrave 25 Sep 2007 11:09
1/2
it was ok, i didnt think the brutes were very convincing though. id have to see it when its not ruined by comression i guess

Joji 25 Sep 2007 12:14
2/2
I enjoyed that. It has a very gritty Battlestar vibe about it. Perhaps they should do a series instead of a film.
Posting of new comments is now locked for this page.