The Charts: Tiger Woods Swings For The Top

Swings and roundabouts for EA 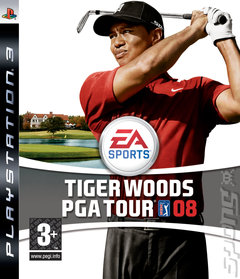 This week in the Charts Electronic Arts scores a hole in... well, four. Thanks to the PS3 release of Tiger Woods PGA Tour 08 the golfing sim scores a Number 1 in its fourth week of release, the first Number 1 for the series since PGA Tour 04.

The news isn't so good for EA on the Nazi-shooting front, however, with last week's Number 1, Medal of Honor: Airborne for the PC and 360 dropping five places to Number 6.

Still, it's swings and roundabouts, with EA nabbing the Number 2 spot with MySims on the Wii and DS in its first week of release. Right behind it is Nintendo's Super Paper Mario for the Wii, which climbs one place to Number 3.

Midway's Stranglehold on the 360 sees a bit of a slip, dropping from Number 2 to Number 4. Could the release of a certain big-name first party title on the 360 tomorrow have something to do with it? Maybe...

Codemasters skids into the Top 10 with Colin McRae: DiRT this week, climbing from Number 11 to Number 8. This is obviously related to the tragic death of the great man. It's going to be seeing some healthy competition shortly, however, with SEGA Rally out at the end of the week.

The second highest new entry this week is Sierra's pretty-pretty, real-time strategy, Commie-fighting World in Conflict, which débuts at Number 15. A fair way behind it is Sony's SingStar Rock Ballads, which emotes its way into the Charts at Number 25, one spot ahead of SEGA's Sonic Rush Adventure for the DS, which hits the Charts at Number 26 in its second week of release.

The last new entry this week is Sony's Warhawk, which enters the Charts at Number 38. SPOnG would like to enthusiastically remind you that this only includes the Blu-ray release, with the game also having been available for download for several weeks now. You can read our review here.

Next week's looking like a busy one for the Charts. Keep your eye out for FIFA 08, Juiced 2, Race Driver: Create & Race, SEGA Rally and SKATE. Oh, and there's some game out about space and shooting and that. On the 360? Published by Microsoft? Something to do with a round thing...
Companies: Codemasters Electronic Arts Midway Nintendo SEGA Sierra Entertainment Sony
Games: Colin McRae: DiRT John Woo Presents: Stranglehold Medal Of Honor: Airborne MySims Sonic Rush Adventure Super Paper Mario Tiger Woods PGA Tour 08 Warhawk World in Conflict