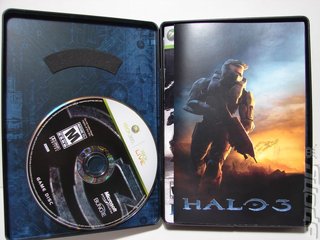 All Images (3) »
Gamers picking up the Halo 3 Limited Edition on Wednesday might be in for a shock. A report suggests that the poor quality of the supposedly higher-class packaging is ruining the disc.

"A friend just opened 3 copies of Halo 3 Limited Edition and with all three copies both disc were loose inside of the package and scratched to death.

"This Limited Edition has a piss poor plastic nub and foam pad disc holding design that is a major flaw and the discs pop off with ease."

Lest we suspect him to be an evil Sony fanboy determined to wreak havoc with Halo 3's mammoth launch, Hooterville also posted some pictures, which you can see to the right and below here, to prove his point.

SPOnG contacted Microsoft for some comment on the situation, but none was forthcoming at the time of press. It's possible that Microsoft doesn't care about this chap because he got his copies early, but SPOnG's sure that's not the case.

This instance of damaged goods suggests one of three things: a bad batch of copies has gone out, and there will be multiple but not widespread problems; the problem is endemic to the packaging and they'll all be cause damage, or Hooterville's mate is just really unlucky with his three copies. In any case, SPOnG recommends opening yours before you leave the shop.

SuperSaiyan4 24 Sep 2007 12:31
1/5
How stupid are Microsoft to do a very similar thing 2K did with PREY collectors edition which was sold in the USA only?

How difficult would it have been to just put a lining of that usual hard plastic inside?? Instead a crappy inside to easily damage the disc!

I am getting the legendary edition and was looking to get the collectors edition as well (Why? Because I can).

Nicholas Hyett 24 Sep 2007 16:22
2/5
I do agree, why not stick to the normal disc holder in the middle but make it black like the design or something.

By the way the legendary edition will be practically impossible to get so i doubt that many normal people will have one. Because i am in Guernsey and all shops over here were promised at least some legendary editions, now not 1 of these editions will grace our island, in fact all of the Channel Islands are not getting any at all. I have heard that only 7000 have been made so let me think abouthow many people are in London alone let alone the enire UK.

RIPRAW 25 Sep 2007 09:03
3/5
Mine got delivered this morning, and before I'd even open the packaged I could hear that the disc was loose. Oh b******s I thought. So yeah, it has quite a few scratches. I can see Microsoft doing a recall on these.

tyrion 25 Sep 2007 16:44
4/5
Looks like the rumour is confirmed, but Microsoft in their infinite wallets have agreed to replace your scratched disks.

xbox.com wrote:
NOTE: This program covers the Halo 3 Limited Edition Game Disc and Essentials Disc at no charge through 12/31/07.

aaron 12 Aug 2008 12:14
5/5
mine does that my disc is not that bad but blockbuster wont let me trade it in and i bet its worth Ł18 easy i need Ł18 to get guitar hero but cuz of some microsoft or bungie budgeting im stuck with it and it still plays fine!
Posting of new comments is now locked for this page.