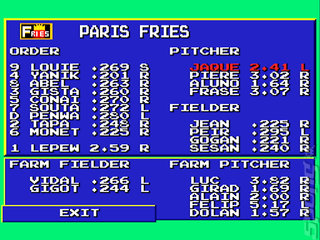 World Class Baseball
All Images (18) »
Nintendo's Hanabi festival on Virtual Console continues, and this time it's the week of the ninja! This week's never-before-seen-in-Europe titles are Ninja Gaiden and Ninja JaJaMaru-Kun.

Ninja Gaiden originally came out in 1989 on the NES. It features a well-known chap going by the name of Ryu Hayabusa off on a quest to find his missing Dad. It might be seen as fortuitous that Nintendo's releasing the original Ninja Gaiden just a couple of weeks after the confirmation of Ninja Gaiden 2 for the 360. Not that SPOnG would ever accuse Nintendo of being opportunist... You can get Ninja Gaiden for 600 Wii Points.

Next up is 1985 Japanese Famicom title Ninja JaJaMaru-Kun (or ?determined little ninja? if you want the English translation). Nintendo tells us that this ?quirky action-platformer? did pretty well for itself in Japan and that its exactly this kind of hidden nugget that it hopes to expose us to with the Hanabi Festival. It's up to players to battle their way to the top of multiple stages, dispatching throwing stars and death in their quest to rescue Princess Sakura from the wicked Lord Namazu. It's all yours for 600 Wii Points.

Coming from outside the Hanabi Festival this week is Turbografx sports title World Class Baseball. It offers up 12 different teams for players to choose from to compete either against the computer or their mates. It'll set you back 600 Wii Points.