Ubisoft to Publish No More Heroes 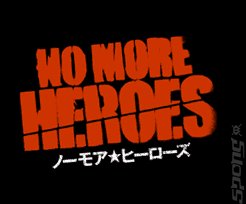 Ubisoft is to publish No More Heroes, the latest work of art from feted game developer, SUDA 51 (he of Killer 7 fame) in North America, with news on the publishing deal on the game across Europe expected to follow shortly.

No More Heroes is based around the character of Travis Touchdown, a drop-out from Santa Destroy, California who wins a lightsaber in an internet auction and by a series of some bizarre coincidences, becomes a leading hitman!

No More Heroes is a free-roaming, sandbox style game, in which Travis gets around either by foot or by motorbike, in his quest to kill the top ten assassins. The game makes innovative use of the Wii Remote, which controls Travis? beam katana (while the nunchuk controls the character?s direction).

SPOnG is set to catch up with SUDA51 to find out all the latest on No More Heroes out at the Tokyo Game Show this very week, so stay tuned for more on what promises to be one of the few Wii titles to currently watch out for in 2008.

i would imagine they are too busy walking on the beaches looking at the peaches to be bothered? (those remaining anyhoo)