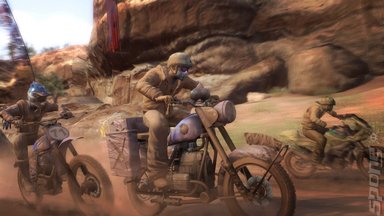 All Images (5) »
Sony has snapped up MotorStorm developer Evolution Studios along with its subsidiary Bigbig Studios ? they of Pursuit Force Extreme Justice fame.

Following the acquisition by Sony, Evolution?s co-founders, Martin Kenwright and Ian Hetherington are to leave and cash-out, with MD Mick Hocking becoming group studio director for Evolution, Bigbig and Sony's Liverpool Studio (they of WipEout fame).

You may remember that Evolution established its reputation as the developer of the World Rally Championship series on PS2 and the studio is currently working on the next instalment of the Motorstorm franchise for PS3, scheduled for release later next year Bigbig Studios, based in Leamington Spa, was founded in 2001 with backing from Evolution Studios and SCE.

"Our strategy is to create the best games by working with the best talent and Evolution and Bigbig are world-class additions to our team," said Phil Harrison, President of SCE Worldwide Studios.

"The incredible people in these studios further extend the depth and skill of the industry's largest platform-exclusive development resource".

SCE Worldwide Studios now employs over 2,500 employees worldwide across its 15 game development studios in Japan, the USA, the UK and The Netherlands.

For more background, check out SPOnG?s recent interviews with both Evolution and Bigbig.

If you'll recall, Sony's Liverpool Studio is actually the remnants of one of it's first buying sprees - that of 16bit hero Psygnosis. Several years later, Sony rebranded all the Psygnosis offices to "Sony Studio XYZ", then closed a whole heap of them down.

Ian Hetherington was the founder of Psygnosis, which makes this the second time he's "sold out" to Sony

I wonder if the plan is to assimilate these developer brands in the "Sony Studio Meh" fold, or if this time the have the bloody good sense to leave them alone.

I vote that Sony reverts Liverpool Studio to Psygnosis.

I vote that Sony reverts Liverpool Studio to Psygnosis.

Hi im Psygnosis, you might remeber me from such games as, Wipeout, Destruction Derby & Lemmings......

Hell yes get them back and while there at it can we have a Discworld 3 or am i on my own there?

Well yes it was, what i meant was a true sequel to discworld 1 & 2 more of comedic side.
Posting of new comments is now locked for this page.