?The Nugget? is continually amazed by detail and accuracy 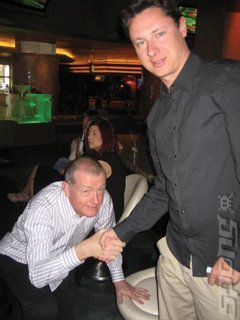 We?ve just received word that Davis is back at the coalface of lending his image to pimp a videogame, this time around lending his PR skills to help gain that all-important mainstream media coverage for Koch Media?s World Snooker Championship Season 2007-08 on Nintendo DS, due for release next month on October 26.

Davis? back-breaking work for Koch even extends to him having to sign some exclusive merchandise. It?s a hard enough life?

He (or rather, his virtual likeness) will also appear in the game alongside 95 other snooker pros and well-known alcoholics and drug casualties including Ronnie O'Sullivan, Graeme Dott, Peter Ebdon, Neil Robertson, and John Higgins.

In game commentary is provided by (yep, you guessed it!) our favourite beardy BBC pundit, John Virgo.

"Snooker video games continually amaze me with level of detail and accuracy that goes into them. I'm looking forward to working with Koch Media on this release for Nintendo DS - although I have pointed out that the cue that comes with this handheld is a lot shorter than the one I'm used to," commented ?The Nugget?

Watch out for more on World Snooker Championship Season 2007-08 on Nintendo DS, in the coming weeks.