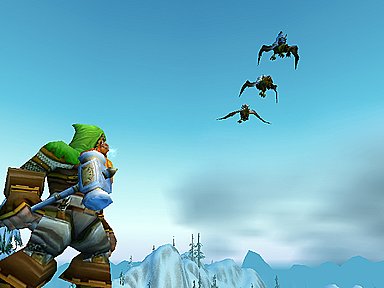 The guild, going by the name of Abhorrent Taboo, engages in simulations of extreme sexual situations within the game and apparently takes no precautions to ensure its members are over 18. It claims that it has been reported on numerous occasions but does not violate Blizzard policy.

Despite that, Blizzard has disbanded the guild, with employee Verrith writing in the WoW forums, "This matter is not one Blizzard takes lightly in any way, shape or form, and we do not wish to have this topic continue circulation".

The guild leader has reportedly said, "I want to defend us, but I also want to defend the pedosexual community." The leader pointed out that she was referring to paedophiles who do not actively molest children.

The guild leader's welcome message to the group (which now appears to have been removed from the WoW forums) aggressively defends the group, stating:

"Role-playing is legal. Even if you are role-playing something that would be considered deplorable and highly illegal IRL, it's still just role-playing and isn't subject to any form of disciplinary action. Negative publicity is still publicity. Make a Digg or website about how sick we are. Report us to PervertedJustice. All it does is bring in more members. In fact, the Digg the guy on Ravenholdt made about us was so effective, several people signed up for WoW just to be in our guild. The bottom line is: We're allowed to do what we do on any server we please and no one can do anything about it."

In fact, the guild's activities might be considered illegal as an incitement to unlawful activity. Opponents of the group hold that since Blizzard allows under-18s into World of Warcraft, it has a responsibility to ensure their safety. Stopping them joining guilds such as Abhorrent Taboo is extremely difficult at best, however.

Blizzard has shown that it has, in spite of the guild leader's claim, been able to do something about it in disbanding the guild. The members, however, have reformed as Vile Anathema.

Blizzard employee Verrith has said, " ... Let it finally be said that we appreciate those of you who brought this particular issue to our attention and that we will continue to follow up with this matter in the future to ensure the safety of all parties concerned." Whether this means we will see the new guild disbanded, however, remains to be seen.

Second Life came under fire with similar allegations earlier this year in Germany, where virtual sex with minors involved is illegal.

Legalities of what the guild does aside, Blizzard is entirely within its rights to ban the group as owners of World of Warcraft.

Besides everything else, Abhorrent Taboo is certainly not helping the games industry as it faces governmental reviews and attempts at censorship.

Let us know what you think in the Forum.

irritant 19 Sep 2007 10:47
1/5
Sound to me like this could have very serious implications for games across the board. If it is decided that "virtual" kiddy fiddling is illegal because it's illegal in real life, then what about "virtual" murder?

deleted 19 Sep 2007 12:48
2/5
As if gaming isnt getting a bad enough rap as it is, that some people see fit to encourage ridiculous cult fashion clans that promote Pedophilla behaviour and expect it to be deemed acceptable?, maybe i just cant understand that mindset but if this kind of thing has to exist then i certainly shouldnt exist in a place where anyone of any age can join in.
more comments below our sponsor's message

deleted 19 Sep 2007 12:53
3/5
irritant wrote:
Sound to me like this could have very serious implications for games across the board. If it is decided that "virtual" kiddy fiddling is illegal because it's illegal in real life, then what about "virtual" murder?

The difference here is that they are allowing under 18`s to join in there (sick and twisted) fun, and as there are no laws against either virtual Murder or Pedophilla then it would at the discrection of the online hosts/providers to monitor this and base it on morals, ethics and values, but i can understand where you are coming from its like virtual murder can be seen as more acceptable as a virtual pedophiles.

The problem is that the revulsion of paedophilia is a hatred of deviance, not simply a hatred of the abusive actions of the paedophiles who do engage in sexual activity with children (who are a small fraction of the paedophile demographic). We know how much people ostracise those who are perceived to be deviant or abnormal; it is a sad aspect of human nature.

I must admit to having never played WoW - so I know nothing about the rules of the game - however censoring someone because they use the game as a harmless release for their urges seems wrong, not to mention dangerous in this instance.

irritant 24 Sep 2007 19:30
5/5
Brian_ANU wrote:
I have to say that "irritant" makes an excellent point.
I must admit to having never played WoW - so I know nothing about the rules of the game - however censoring someone because they use the game as a harmless release for their urges seems wrong, not to mention dangerous in this instance.

My point was not about the rights and wrongs of this particular group, but simply that if one real life illegal action can be considered illegal in simulation, then what about every other real life illegal activity? In theory you could be classed as a criminal for playing just about any video game.

This also links in with the wider debate about censorship within video games. As much as I agree that censorship in general is a bad idea and that responsible adults should be able to be responsible for their actions, I think video game developers and publishers should take into account the general public and medias view of video games before making games that are likely to draw more negative attention to the industry.