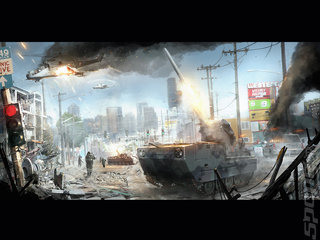 Here at SPOnG we've become used to firing up World in Conflict trailers with a certain amount of trepidation. We do, after all, fear the Red as much as any God-fearing capitalist should.

Normally there are yelps of panic, dives for cover and embarrassing incidents involving the night before's beer ending up in places that it shouldn't. Imagine our surprise, then, when the start of this latest video yielded not cries of terror, but a hearty chuckle.

Why? you ask. Not for the obvious reason - because we take joy in seeing communists being bombed (which isn't to say we don't). No, it's because this latest video from Vivendi has made us realise that there is absolutely no better way to promote a real time strategy game about two superpowers duking it out on a global scale than with Tears For Fears singing Everybody Wants to Rule the World.

So tuck in! There are only two more days until World in Conflict hits the PC, after all. When you're done, visit SPOnG's dedicated game page for more.