Get your sunnies out 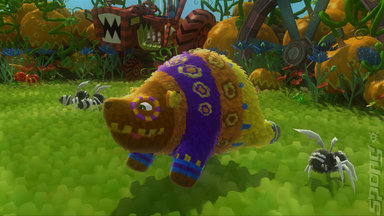 All Images (3) »
Just when your eyesight was starting to go dim thanks to the drawing in of Autumn, Microsoft has turned up with a new video for Viva Pińata: Party Animals to brighten your day and burn your retinas.

Hudson Horstachio, Paulie Preztail, Franklin Fizzlybear and Fergy Fudgehog are all here as they head over to Pińata Island to partake in that most heinous of all television genres: reality TV.

We're not going to hold it against Microsoft, though. Nor will we hold it against the game that this instalment isn't being developed by Rare, with Krome Studios taking the crepe paper reins. It's just too difficult to hold a grudge against a series that recently prompted its first engagement.