Pharrell Williams to save the day 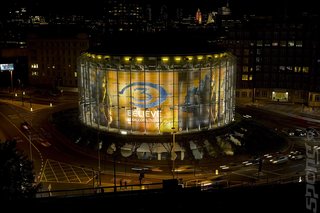 All Images (3) »
Retailer GAME has had to cancel plans for a midnight launch upon release of Halo 3 at its flagship Oxford Street shop next Wednesday morning.

Westminster Council has refused to allow the launch, fearing midnight debauchery from rabid Halo fans. The council, it seems, thinks the launch will be bigger than that of the PS3, Wii and Xbox 360.

Stephen McGill, head of gaming and entertainment at Microsoft said, "Halo 3 launches in the UK on Sept. 26, and although we are not going to be running any official midnight opening events along London's Oxford Street (due to from Westminster Council concerns of huge crowds) we are pleased to confirm that over 1,000 retailers around London and the rest of the UK will be opening up at midnight to ensure fans can get their copy of Halo 3 it as soon as humanly possible - including many Game, Gamestation, HMV and Virgin Megastores stores, and of those that can't open at midnight many will be opening early on the Wednesday 26th too."

So there you have it. You won't be able to get a midnight copy of Halo 3 from GAME in London, but GAME in Wakefield might be able to help you out.

All is not lost, however! Halo 3 will still get a bonanza launch, with Pharrell Williams (of N.E.R.D.) set to kick off the game's time on store shelves at the BFI IMAX. He will take on members of the public, as well as playing other celebs from around Europe over Xbox Live.

Stephen McGill added, "To celebrate the launch on Tuesday 25th, Halo 3 is taking over the BFI IMAX cinema in Waterloo (UK's biggest cinema screen) where lucky fans and a number of top celebrities will be going head to head playing Halo 3 on the giant screen. Tickets to the red carpet premiere event can be won at www.xbox.com, along with giveaways in The Daily Telegraph this Saturday and on Kiss FM next Tuesday."

Find out more about Halo 3 over on SPOnG's dedicated game page.

Especially one as mind numbingly generically boring as the halo series?

Hats off to microsofts marketting dept - they really could sell s**t to southerners..

deleted 18 Sep 2007 15:07
2/10
GAME must be gutted, one of the biggest gaming events ever, and they cant open their flagship store, Still that leaves plenty of copies for the morning after.
more comments below our sponsor's message

Just because your CACKSTATION has nothing but s**tty ports doesnt mean you can go an hit on the biggest franchise of all time.

It will be the worlds biggest selling game as Sony has still yet to release anything that can be called a game.

Wouldn't that be Pokémon?

Well they couldn't sell it to Northerners, could they? Not after they've spent all 68 pence of it on dripping, whippet fodder and flat caps...

You could just order online and get it early... gameplay.com always deliver a day early.

Quaid 25 Sep 2007 20:18
10/10
Most Gamestations are opening just b4 midnight tonight including the one in Wakefield.I used to work there and my Legendary Halo 3 is waiting there for me :-)
Posting of new comments is now locked for this page.