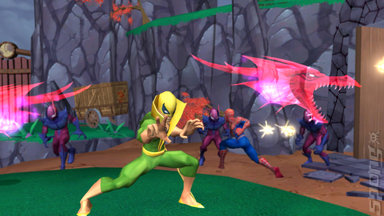 Comics fans can bathe in the neon glow of graphical love today, after downloading the new Spider-Man: Friend or Foe demo from Xbox LIVE Marketplace.

Set for release later this year on all platforms (except PS3), Spider-Man: Friend or Foe is another 2007 entry in the Spider-Man gaming franchise and features many of the most prominent Spider-Man characters fighting against - and with - the heroic wall-crawler.

While teaming up with allies seems straightforward, teaming up with the enemies will be a little more difficult. To get their help, you must first defeat them in battle, but when you do, you will gain the help of some of New York's most feared residents such as Venom and the Green Goblin.

The demo of Spider-Man: Friend or Foe is a mere 431MB and will see you fighting alongside one of your bezzie super hero mates on the rain-slick rooftops of downtown Tokyo.