"Pick up and play" style emphasised 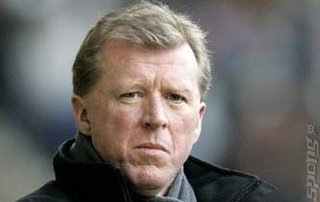 Steve McClaren: Rooney or Heskey, eh, Steve? Let your handheld decide.
All Images (5) »
SEGA and Sports Interactive have announced that Football Manager Handheld 2008 will be available for the Sony's PSP before Christmas.

The companies are promising a new skin and layout that will make the game easier to navigate, while the additional option of a reserve squad will double the number of players that footy fans can utilise. Whether that reserve squad includes Emile Heskey or Wayne Rooney, Gareth Barry or Frank Lampard is of course, down to you. We know who we'd pick though...

?Once again, Football Manager Handheld 2008 raises the bar for handheld management games, with the team squeezing in as many feature requests from the community as were possible?, Sports Interactive's studio director, Miles Jacobson, tells us. ?When we first started on the quest for a real pick up and play football management game, we didn?t even believe ourselves that the game would be able to have the depth that is does, whilst still being so much fun to play in bite size chunks, or on long journeys and holidays.?