Sega Reneges on Another On-line Promise 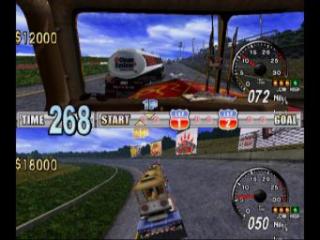 All Images (2) »
Sega of Europe and Sega of America have made a joint announcement about the online future of 18 Wheeler American Pro Trucker.

The game will not feature Internet play, as was previously promised by Sega and falls into the same pit as Daytona USA 2001 as a ?should have been so much more? title.

The recent decisions to pull the online capabilities of 18 Wheeler and Daytona come down to the cost Sega was to foot in hosting full online play. The decision was made in Japan several months ago.

?Everyone is worried about the reaction of the public and the press if Sega of Japan decides to pull the plug on Europe,? said our Sega insider recently. ?There are many gamers that bought the Dreamcast solely for online gaming and Daytona was supposed to be a fine example of this with full online racing.?

The official Sega release on the matter states that ?Due to a heavy scheduling commitment and Sega's continued software focus plan, 18 Wheeler American Pro Trucker will not incorporate online head-to- head gaming but will instead feature a host of online functions allowing players to upload/download ghost and replay data together with the facility to upload their fastest times on to the European and American Ranking Boards."

It?s not the end of the world, but the news is a little disappointing. Still, anyone that has played the arcade original will know that the game is a magnificent one player title. We just hope that Sega doesn?t do this with many more games in the future.