BioShock To Get Sequel 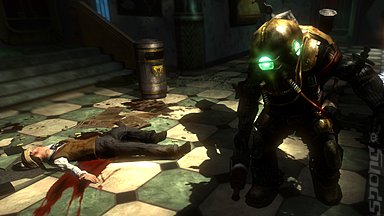 Take Two chairman Strauss Zelnick has revealed that BioShock will get a sequel in around two years time.

In a conference call with analysts, Zelnick addressed how the company plans to avoid watering down franchises with annual releases, saying:

"I would say, probably, roughly an every-two-year schedule would be optimal. And if you look historically that has been largely the case with GTA, and I'd expect we'd apply roughly the same strategy to BioShock because BioShock is shaping up to be a very important franchise. I don't want to say more than that about BioShock because I certainly don't want to jinx it, but I feel awfully good about where that's going."

It's not a huge surprise, given BioShock's critical and commercial success (albeit with the loss of the top spot in this week's Charts), but SPOnG's enamoured with the title and pleased to have confirmation of a sequel anyway.

When asked about sales figures - 1.5 million copies of BioShock have been shipped, although sell-through figures (sales bullshit for 'the number we've actually sold to consumers in shops) have not been revealed - Zelnick remained coy, but said Take Two believes the game is "one of the fastest selling games in video game history."

Also revealed was the fact that L.A. Noire, developed by Team Bondi for the PS3, and Rockstar Leeds' Beaterator made for the PSP in conjunction with hip hop producer Timbaland, have slipped. Both are now likely to go on sale in Take Two's fiscal year 2009, which kicks off in November next year.

Discussing the slips, Zelnick said, "Right now we're just pushing out the release date, and we'll be more specific as we have more information. We are continuing to develop the titles, and I think our decision was driven in part by the fact that we have such a strong release schedule for '08 and a pretty robust one."

You can find out what SPOnG thought of BioShock in our review.
Companies: 2K Games
People: Strauss Zelnick
Games: Beaterator Bioshock L.A. Noire