Medal of Honour: Airborne descends on the Charts 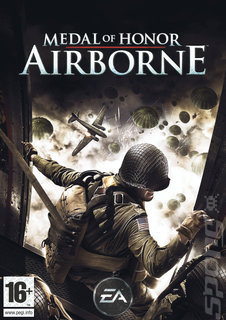 After failing to topple the might of BioShock last week, Electronic Arts has taken the top spot in the Charts. It's not last week's contender ? Tiger Woods PGA Tour 08 ? that gains the honours, however...

...it's Charts newcomer Medal of Honour: Airborne, available on the PS3, PS2, 360 and PC that descends on the Number 1 spot. It's followed by the swinging Tiger Woods, which retains last week's Number 2 position but falls short of Number 1 by a paltry 78 sales. SPOnG can't imagine EA's too upset by that.

Number 3 is where 2K's wet shooter BioShock comes to float after two weeks at the top. SPOnG still loves it though. Read our review to see why.

Another couple of new entries ? Two Worlds from Southpeak Games which enters at Number 4 and another EA release, The Sims 2: Bon Voyage at Number 8 ? mean that Nintendo's Top 10 presence is reduced from four titles to three.

Both DS Brain Training titles slip two places, with the original down to Number 5 and the follow-up down to Number 7. Tendy's other brain enhancing release, Big Brain Academy: Wii Degree, slips four places to Number 10. Pokemon Diamond fares less well, dropping out of the Top 10 from Number 10 to Number 19.

THQ's Stuntman: Ignition has a strong second week, climbing up from Number 9 to Number 6, while a whopping 80% jump in sales drives Worms: Open Warfare 2 from a poor start at Number 38 last week to Number 11.

The only other new entry this week is Capcom's Monster Hunter: Freedom 2 for the PSP, which enters the Charts at Number 39.

Look out for a few big releases next week. Sony's Heavenly Sword on the PS3 (a review of which can be found here), Koei's Fatal Inertia for the 360, Square Enix's Heroes of Mana for the DS and Nintendo's own Super Paper Mario for the Wii all see release on Friday.
Companies: 2K Games Electronic Arts Nintendo Sony South Peak THQ
Games: Bioshock Dr Kawashima's Brain Training: How Old Is Your Brain? Medal Of Honor: Airborne Monster Hunter: Freedom 2 More Brain Training from Dr Kawashima: How Old Is Your Brain? Stuntman: Ignition Tiger Woods PGA Tour 08 Two Worlds Worms: Open Warfare 2