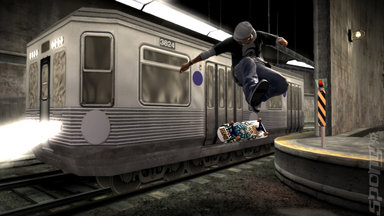 All Images (5) »
Thankfully SPOnG has another sports game battle to occupy our time with this coming autumn and winter, in addition to the traditional Pro Evo versus FIFA face off, in the shape of the Skate versus Tony Hawk?s Proving Ground clash.

Tony Hawk?s Proving Ground has the brand equity and familiarity with gamers, whereas EA?s Skate, the new grommet on the block, boasts a whole new, far more intuitive control schematic ? one which SPOnG finds perhaps a little bit harder to master, but far more rewarding than the combo button mashing in the Hawk games.

That said, if you?ve spent years mastering the combo button mashing in the Hawks? series it?s highly likely that you are not going to want to have to learn a totally different control mechanic.

Either way, you can now get a taster of the playable demo of Tony Hawk?s Proving Ground which has gone up on Xbox LIVE today.

THPG features a Video Editor with full-featured editing tools and visual effects, a fully customizable online Skate Lounge, freedom to skate from single player to online seamlessly and a bunch of new gameplay mechanics such as bowl carving and the ability to build and change the skateable terrain.