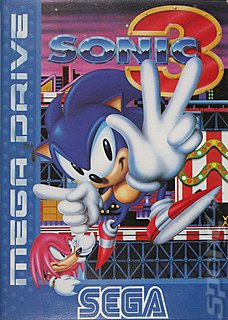 There's much evil to be fought with this week's Virtual Console update for Nintendo's Wii. There's a whopping five SEGA titles to choose from, with Sonic The Hedgehog 3, Ghouls 'n Ghosts, Crack Down, Shining in the Darkness and ESWAT: City Under Siege all making their VC début.

Sonic 3 sees the first appearance of the pinkest of all Echidnas, Knuckles, as Sonic and Tails battle to collect all of the Chaos Emeralds. You know the drill: speedy platforming against robo-nasties with cute little animals trapped inside as you try to grab as many rings as you can.

Ghouls 'n Ghosts originally saw release in 1990 and puts players in the role of Arthur as he lays it all on the line to save the soul of his bride, Princess. Unfortunately, it's been nabbed by an evil demon, so players will need to battle hordes of the undead with an assortment of weaponry and magic.

If you want something a spot more strategic, you might want to check out Crack Down. No, Microsoft hasn't flipped its lid and stuck its sci-fi 360 shooter on the Wii, this is the 1990 release which sees players saving the world from a bunch of evil cyborgs created (in a fit of inspired originality) by a mad scientist. You'll need to carefully position a series of time bombs (bombs? Ban this sick filth!) as you fight your way through laboratories and bases to take down the sinister cybernetic baddies.

Shining in the Darkness, originally released back in 1991, has a more classic bent. Dark Sol (with a name like that, you know he's bad news) has vowed to take over the the kingdom of Thornwood, and its up to you to go into battle seeking out the Arms of Light to aid you ion your quest. Throw in a dark labyrinth and a quest to become a shining knight and you've got your self some wholesome fantasy fun.

Lastly (and again reminiscent of Crackdown) is ESWAT: City Under Siege, first released in 1990. It's up to players to take to the streets as part of the Cyber Police Force to wash the scum from the streets. As you'd expect, a veritable arsenal of weaponry will be available to you as you do battle against the city's lowlifes.

All of the above are available for 800 Wii Points. They bring Virtual Console's total up to 135 titles.