Pikmin To Return To Wii?

Possibly but then again... possible. 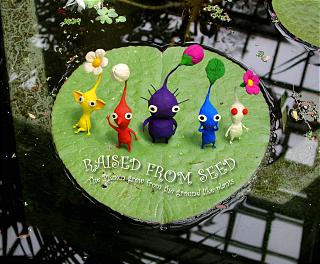 Pikmin: Cute little bastards on their way back?
Nintendo of Japan has registered (and re-registered) a few trademarks some of which are causing not a little kerfuffle across the Internet. For the most part the registrations are in place either to enable the company to sell existing intellectual property into different regions, or simply to maintain its control.

The main gaming name to get attention is the re-emergence of Pikmin (puzzle, RTS with a horde of tiny floral aliens). In this case it's a renewal of the trademark, which could be a simple case of legal necessity or (as the Interweb would have it) a signal that the little cuties are soon to appear in a new game. Frankly, now Ubisoft's Rabbids have calmed down to a background boil, the idea of the Pikmin reappearing and uttering their cries of delight would seem to be ideal for the Wii in all its family-friendliness.

There are, however, a couple of intriguing newcomers that we, like everybody else, are going to make some informed guesses at:

Mii Contest Channel - as we noted regarding Nintendo's E3 presentation regarding a new channel that means that, "Now people can show off Miis they have created either on their own or for Nintendo-suggested competitions. Coming in 2007".

Nintendo Magic - the Nintendic site sums this one up nicely, "According to Nintendo Magic is a magician simulation title for the Nintendo DS that was released in Japan in November last year. Despite little coverage, it is planned for release in North America on November 26 this year."

Wii Body Controller - Everybody else is calling the Wii Balance Board that come with Wii Fitness...erm.. the Wii Balance Board. Nintendo, however, wants to use the board for other activities than balancing, so it makes sense to call it Body Controller. Or maybe it's full Virtual Reality (remember that one?) for the Wii. Yes, that's definitely it - full-body VR with built in networked sex-simulations. Absolutely for sure.†

Mii Audition - Sounds like a Tarzan competition but it won't be. Instead it will be a channel that enables you - once again - to compare your Miis in order to join an online version of High School Musical III.†

Wii Handle - A new controller aimed at a game in which you carry luggage to and from airport security lines in the War On Terror. We would expect to see, Wii Bloody Annoyed, Wii Want Our Belts and Shoes Back, and Wii Want You To Take That Manual Metal Detector Out Of THERE! very soon.†

Pikmin - Renewal of trademark protection - at least this is the rough translation.

Soma Bringer - Mmmm... well, this could go either way: Dystopian future world in which you make moral choices and drink a bunch of the dream-bringing, mind-flattening Soma drink that is the star of Aldous Huxley's novel (that's old skool dead tree stuff, kids) Brave New World. It could also be a game about transporting Hindu drinking matter from one temple to another. Or it could relate to neuropathology in a cute puzzle game that sees the player carrying out 12 hours of surgery on various brains.†

We will report back as soon as we have any more information.

† For the humourly challenged - these are not ground-breaking exclusives, they are guesses.
Companies: Nintendo
Games: Pikmin

Joji 5 Sep 2007 12:12
1/3
Pikmin is welcome back, but the rest of that sounds pretty lacklustre. Where the freak is the demo channel, Nintendo?

A demo channel should have been first and you still don't have one. That's just poor, for such a successful console.

This is a plea to anyone out there who has any Pikmin sound files available - can you send 'em over plz? The company copies are in the basement and out of reach, so it's over to you, dear reader, to help us out with some 'ha ha ha ha, hooowww!' I'm laughing out loud just thinking about it! Anyway, it's time for some new alerts when we get new mail/messages, and Pikmin fits the bill. If anyone can help, it'll be much appreciated.

And yes, we tried searching with Google, and hit a minefield of uselessness. Over to you.

its getting a bit outta hand, the orignal point of the Wii, was simple controls and while its still offering that its soon going to be a different controller for each game, with have Wiimote With or with out nunchuck with or with out Classic with or with out Wii Wheel with or without Zapper & Balance Board soon to come GH3 Guitar Boogie Mic, all within the first year!, now how much nunchuck could and nunchucker chuck if a nunchucker could chuck nunchucks?, whats next? speculate to accumalate please, and Wii hard disk doesnt count no matter how much we want it,