The Charts: Transformers Gets A (Bio)Shock 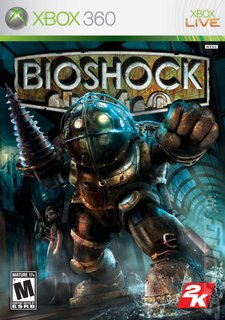 2K Games makes an unsurprisingly strong entry into the Charts this week with BioShock. The publisher's superb shooter dislodges Transformers from the Number 1 spot as well as driving Xbox 360 hardware sales.

The watery first-person shooter accounts for a whopping 58% of all 360 Full Price game sales this week, with 88% of the game's sales on console and 12% on PC. It also earns itself the honour of becoming the second-fastest selling 360 title to date, coming in behind Gears of War, although you can expect it to drop to third fastest-selling with the release of Halo 3 on September 26th. Keep your eyes on SPOnG for a full BioShock review later in the day.

Beneath the usurped Transformers comes Nintendo?s original Brain Training title on the DS at Number 3. In behind it at Number 4 is its recently released successor, More Brain Training, which seems to be bizarrely driving sales of its predecessor higher than its own.

Taking the spot held by More Brain Training last week is Wii Play, which drops from Number 2 to Number 5. Tendy's Pokémon Diamond for the DS sees a similar drop, sliding from Number 4 to Number 6.

Electronic Arts and Ubisoft are next up with a couple of film tie-ins. Harry Potter's phallic flying hardware loses him a bit of altitude, with Order of the Phoenix dropping a place to Number 7. Behind it, Surf's Up from Ubisoft holds its place at Number 8.

Microsoft's Blue Dragon joins BioShock as a new 360 title in the Top 10, with the RPG entering the Charts at Number 9.

Ubisoft manages to grab a second place in the Top 10, with Ghost Recon Advanced Warfighter 2 sneaking back in at Number 10 thanks to its release on the PS3 and PSP.

Next week is a big one for EA. Watch out for Boogie on the Wii, Madden '08 on the PC, 360 and Wii and Tiger Woods PGA Tour '08 on 360, Wii, PS2, PC, and DS. Also keep an eye out for Team17's Worms: Open Warfare 2 on PSP and DS.
Companies: 2K Games Activision Electronic Arts Microsoft Nintendo Ubisoft
Games: Bioshock Blue Dragon Dr Kawashima's Brain Training: How Old Is Your Brain? Harry Potter and the Order of the Phoenix More Brain Training from Dr Kawashima: How Old Is Your Brain? Pokémon Diamond Surf's Up Tom Clancy's Ghost Recon: Advanced Warfighter 2 Transformers: The Game Wii Play

Joji 29 Aug 2007 10:23
2/10
Totally agree with you, Holly. Every 360 owner should own and experience this game. And I too have als had a few late nights because of it. The whole thing just oozes atmosphere, like the water forever breaching Rapture.

I want Halo 3, but Bioshock is a moving experience that I think has topped Halo 3. Sure, no multiplayer, but I feel what Bioshock does runs far deeper than that, especially for a single player story driven game. As far as I'm concerned 2K deserve a few awards, possibly in the running for game of the 2007. I can see it staying at Numbeer 1 til Halo 3 arrives perhaps.

It true, rumble on the 360 pad adds something mouse and keyboard can't (or are yet to) emulate. Such a great use of sound in it.

hollywooda 29 Aug 2007 10:42
3/10
this game deserves every bit of praise it gets, it so refreshing to see a developer step away from the sterotypical FPS no butch gruff voiced amour wearing space marine type people in sight! (not thats a dig @ halo....just the clones!) but to go through a game & have no idea whats around the corner, i hope developers out there have playd though this game & not only taken there latest bulk stadard FPS's back to the drawing board, but have set the drawing board on fire. Bioshock is what happens when u take a chance, dont bandwagon hop, & actually have a creative team that are creative....look, listen & learn,,,,

alexh2o 29 Aug 2007 10:58
4/10
Couldnt agree more! BioShock is one of my all time top games. Just behind SW:KOTOR I think. Everything about it was so immersive and clever. Ive let 4 of my friends play the beginning now and all of them did exactly the same as me... the cut scene ends and you just sit there waiting for it to continue, then it dawns on you, F**K thats in game graphics!!

Obviously there are a few flaws in the game; you level up faster than the difficulty of the game, with bloodlust and wrench jockey 2 you can just beat down a dads with a wrench!!, it ends.... But still all of these are only flaws if you want them to be. The rumble... oh my, dads would be ass without it. Im sorry, rumble IS NEEDED!

Oh and in case you didnt know, theres different endings depending on whether you rescued all the sisters, murdered them all or a mix of both. So theres an excuse to play it another 2 times!

hollywooda 29 Aug 2007 11:00
5/10
whooo whooo, no spoilers here please.... What level are you playing on? if your playing on Hard it pretty difficult to beat a Daddy with a wrench?

I played through on medium and im now playing it again on hard, about a third of the way. The clever thing about it is Im finding hard easier because I know my play style now, but its even more fun because you think of these elaborate ways of setting traps etc.

How you getting along with it?

hollywooda 29 Aug 2007 11:57
7/10
I have to get in what i can @ night after work, basically until my eyes burst into flames or my missus tells me, OI BED!... so i'm very tired today, but i'm sure i'll have to have a go 2night, it sooo fcuking addictive, if i have tear up with a load of enemys then think about it after, & think ohh i could of done it that way & saved more med pack & eve, i have to reload & go through it again!, i've become this bioshock perfectionist with OCD!!!!! hahahaha

On a side note i'm actually glad to see a licensed game doign well... no not transformers or harry poter... freakin surfs up! Did anyone else bother downloading the demo? It's liek SSX with surfing penguins. Whoever decide to say "screw making a cliche platformer lets make a fun over the top surfing game!" deserves an award. I have a freidn who actually bought the game cause of that demo. really is a lot fo fun, like ssx... not like ssx3 :/

PreciousRoi 29 Aug 2007 23:53
9/10
I beat it on Hard the weekend I got it in one marathon stretch. Haven't been able to talk myself into starting it again right away...I also had a few levels left of FEAR. I can't believe I missed at least one of the collection Achievements, I must have missed more than I thought. I never did remember to save often enough to let the OCD kick in, and there wasn't exactly a real incentive to what with the Vita-Chambers.

The one PC game purist hasn't got it for his PC yet, but when I brought it over and hooked up to his LCD via VGA I could he was visibly impressed.

Good job! In todays world I thinks theres no room for platform purists. You need to play all platforms and choose the best for the game in question.
Posting of new comments is now locked for this page.