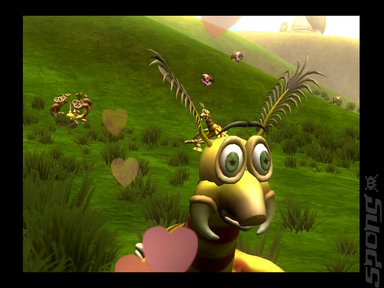 Amid the sweat, blood, tears and other nasty effects of sticking thousands of people along with heaps of electrical equipment in a giant greenhouse in August that was the Leipzig Game Convention this year, one game really stood out: Spore. This year's GC was the first time EA has shown off the game in a year as anything other than video, and I can happily report that it was worth the wait and body odour.

I sat down with Spore-developer Maxis's VP of marketing, Patrick Buechner, for a wander through the second two levels of the 'Everything Sim', and had a look at the 'Creature' and 'Tribe' levels. Although I'm not, by nature, much of of a sim fan, I can happily report that what I saw made a grin break out across my normally blank, emotionless face.

The creature editor, as I've come to expect, looked fabulous. Watching a little guy of your own creation tramp around on over-sized feet you've given him just to be mean, is endlessly rewarding.

As the least shown off, however, the Tribe level was the most interesting to look at. While SPOnG as a whole is starting to to suffer intellectual concussions from the amount of times we've heard "...the kind of choices you make really affect the outcome of the game", watching a bunch of crazy-looking purple guys failing to serenade another tribe so destroying its shelter with musical instruments definitely raised a smile.

Keep your eyes on SPOnG for full impressions of Spore, along with what we thought of Fallout 3, Killzone 2, Heavenly Sword, LittleBigPlanet and Tony Hawk's Proving Ground among others.
Companies: Electronic Arts
Games: SPORE

Spore was easily my highlight of Leipzig too.
Already a strong favourite for Game Of The Year 08 (if it makes it)