Joust: The Movie Currently In Development 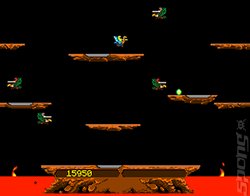 Eyebrows were raised in the SPOnG office earlier this morning when we heard that Hollywood production company, CP Productions is currently making a movie based on Midway?s arcade classic, Joust.

If you need reminding what Joust actually IS, then go and download the trial version from Xbox LIVE Arcade right now.

Hollywood Producers Christine Peters (Area 51, How To Lose A Guy in 10 Days) and Michael Cerenzie (Blackout, Black Water Transit) are onboard for the movie.

CP Productions also plans to bring more new and classic games to the big screen, "Joust is an arcade game that's as old as Pac-Man and has global awareness", said Cerenzie. "We took one element of the game and the brand itself and built a whole new world around it for the film."

Joust the movie is set 25 years in the future in a Las Vegas suspended in mid-air! Cerenzie goes on to describe the Joust movie as "Gladiator meets Mad Max", although how either of those have anything to do with jousting is beyond us.

"This film is the type of action-packed story that appeals to all four quadrants of the movie-going public and we are excited to be in the Midway Games business once again," said Christine Peters.

"We'll cap each film with a moderate budget and bring in awareness with games, graphic novels, and toys," added Peters. "If you look at what Transformers did this summer? today's kids grew up with games and graphic novels and we have that type of fan base to tap into with these projects."

Sorry, "...today's kids grew up with"? Surely they're still growing up? And surely, adults who grew up from the early 1980s onwards had games, let alone graphic novels? Still who are we to question marketing bullshit?

More ideas for bizarre retro and arcade classics that could be given the Hollywood treatment in the forum below please!

Even Mario had a ring of game about it...

WTF does a floating Las Vegas, 25 years in the future and `Gladiator and Madmax`! have to do with anythign related to Joust???????

Odds on this Movie/Joke will make nothing, crash at box office and be on DVD within 2 weeks of cinema release and thats if the production even goes ahead, and trying to compare this to Transformers is just pathetic Transformers the fact it was a Comic/Graphic Novel/Cartoon/Toy before it was a game means no comparison should ever be made to Joust. Marketing Idiots! whats next Chucky Egg Film, Set 1000 years in the future when humans have evolve into bird like creatures its `Star Trek Meets Happy feet`????

Joji 29 Aug 2007 11:03
2/4
I've always been in the frame of mind that these Hollywood executives weren't ever young and perhaps struggle to share a brain cell. Joust! WTF indeed. This to me is clear proof to me that some of them have no clue when it comes to game based films.

It just amazes us that they chose this over Legend of Zelda, and shows clearly what some perceive games to be about in their mindset. I'd vote this one as industry joke of the year.

Damn, come back DOA movie, you are bad, but not that bad or clueless.

PreciousRoi 30 Aug 2007 00:00
3/4
Joust was surely cheaper than Zelda, and they probably got complete creative freedom, surely Zelda would be more expensive, and require oversight and ultimate creative control would lie elsewhere.

I'm gonna go out on a limb here...by Mad Max, I bet they really mean ...Thunderdome. So the plot probably involves an arena, gambling, giant birds, (large) pointed sticks, and possibly either some kind of underground freedom movement or more unlikely, a giant bird guano recycling plant run by Master/Blaster. I for one will be heartbroken (not really) if the Pterodactyl doesn't make an appearance.