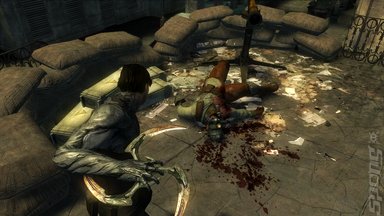 That's going to leave a scar
All Images (9) »
D3?s darkSector has finally got a release date of 22nd January 2008 for PS3 and 360, so at least we have something to look forward to after Christmas this year.

We've also got hold of the last batch of screens from the game for you to check out. The title is generating a considerable amount of hype over at the Leipzig Games Convention this week, as you might imagine, with it being designed by the co-creators of the original Unreal Tournament.

In darkSector you play an elite black-ops agent called Hayden Tenno, who has been sent to investigate a ruined Eastern European city overrun with mutant enemies.

Tenno awakens to find part of his body altered by an infection that has granted him inhuman abilities. Hayden wields a thing called the ?Glaive? - a bladed disc that grows out of his infected hand, serving as his primary weapon throughout the game. The disc can be thrown at enemies with brutal results or used to collect elements from the environment, such as fire and electricity, to use on enemies and interact with the world.

SPOnG caught a quick look at darkSector way back in the early spring and it was shaping up to be more than special back then. If it plays anywhere near as good as it looks, we?re in for a treat in the new year.

D3 Publisher has also confirmed today that a multiplayer announcement on darkSector will be made next month, which, for those of you that just can't wait 'til January, is about the same time the demo will be made available for download on Xbox Live and PSN. We?ll be sure to bring you more on the demo and multiplayer news when we get it.
Companies: D3 Publisher of America D3 Publisher of Europe
Games: dark Sector

Bentley 23 Aug 2007 12:15
1/2
For no good reason, my Spidey-sense has been tingling and telling me that this game is going to turn out to be utter pump. Nice graphics, but we all know that doesn't make a great game. Looks like Resi 4 without the charm, with a naff Frisbee gimmick and a rubbish main character. "Hayden Tenno"? One of the worst names for a character I've heard, at least since Gears of War.

Sure, too early to tell, but I can't help what my Spidey-sense tells me.

Joji 23 Aug 2007 16:06
2/2
I hope this is good. At least the main character isn't unimaginatively named Jack. I'll hold my water on this one, I saw the tralier and it looked pretty good, and a nice possible distraction until RE5 arrives later next year.

Hurry with that demo, D3?