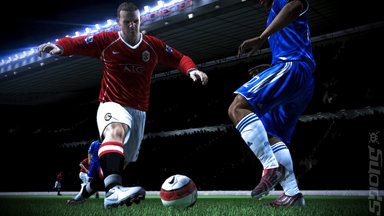 All Images (7) »
"Are you the Ronaldinho of the gaming world? Do you have the skills to be crowned the FIFA Interactive World Player for 2008?" So asks FIFA, as Electronic Arts and Sony Computer Entertainment Europe today announced the new season of the FIFA Interactive World Cup, or the embarrassingly acroynmed 'FIWC' (say it!) - the world's only officially FIFA sanctioned global football gaming competition.

The FIWC kicks off in October 2007 with the Grand Final in Berlin's Sony Centre in May 2008. Players can compete at one of more than 20 physical FIWC 08 Qualifier Events or take part on the PlayStation Network for an ultimate a cash prize of $20,000. (Ł10,000). Enough money to buy and fully kit out a small home cinema for your shed, for example.

"To be associated with the world's leading games publisher, EA, and one of the most respected organizations in the world, FIFA, is very exciting for us," said Simon Rutter, VP Sales & Marketing for SCEE.

"With the added realism that PS3 brings to FIFA 08, we have every belief that now is the time to truly make an impact with the FIFA Interactive World Cup, We're looking forward to PS3 fans helping to make the tournament every bit as iconic for gamers as the real FIFA World Cup is for football fans."

EA's Matt Bilbey, Senior Director, Sports Marketing, EA hits Rutter straight back with a full-on corporate compliment slap, telling him in no uncertain terms that: "The FIFA Interactive World Cup has become a firm fixture in the diaries of many football fans and gamers around the world and we'll be there to bring them a season full of great competition with FIFA 08 on the PlayStation 3. With FIFA 08, EA Sports is delivering the sensations of being on the real FIFA World Cup football pitch, so football gamers in every geography better start practicing!"