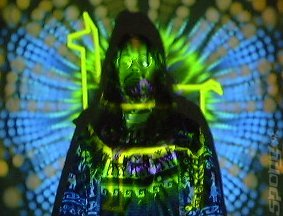 Jeff Minter - The scariest man in gaming?
All Images (5) »
Space Giraffe finally hits Xbox Live tomorrow, but not without a spot of anger and controversy surrounding it. Namely, Jeff Minter, the game's creator, has slammed the Official Xbox Magazine reviewer who gave the much-anticipated game a measly 2/10.

"OK, I found him on the Partnernet leaderboards. Come to think of it I remember having seen his entries before because they were a bit unusual.

"He's on as 'OXM Dan' and he has NO achievements at all for Space Giraffe. It's really pretty hard to play SG for any length of time and get no achievements whatsoever; there are a few that are given out fairly easily by way of encouragement. Genius-boy here has managed to get none at all."

Not a happy Mr Minter. He indicated that the reviewer's score indicates he wasn't playing correctly. He summed it up nicely when he added, "In short, the leaderboards show that OXM Dan was playing the game in about the most shit way possible, and being absolutely crap at it. The leaderboards also show a lot of other people playing the game rather well, so we know it's not the game at fault here.

"Basically he was just rubbish." Burn!

Joining Space Giraffe on Xbox Live tomorrow is Street Trace NYC, a hover-board racer set against a grim futuristic backdrop. The boards are customisable, with nastiness such as lasers, mines and rockets to be had.

Both games will set you back 800 Microsoft Points. For more on Space Giraffe have a look at SPOnG's dedicated game page and see our Q&A with Jeff Minter here and here.
Companies: Llamasoft
People: Jeff Minter
Games: Space Giraffe

LUPOS 21 Aug 2007 13:27
1/2
I want this game sooo badly. Seeing em play it at GDC just looked so fun. He actually went over then about how you can play it lieks it's just plain old tempest but you have to use the "rush"(i think it was called) to really rack up multiplyers and get the most out of it.
_____