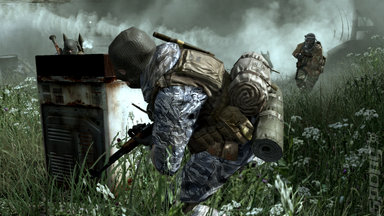 All Images (4) »
It's good to have friends. Activision certainly thinks so, judging by this latest video for Call of Duty 4: Modern Warfare, dubbed 'Multiplayer perks'.

SPOnG certainly appreciates the camaraderie that can only be gained by charging headlong into battle with your blood pumping and your bezzer mates at your side, watching your back and mowing down anyone who would do you wrong. Granted, we're basing this on our experience of Wakefield on a Saturday night, which is more along the lines of cowering in the corner together while some bifter makes menacing eyes at us for accidentally looking at his bird, but still...

Meanwhile, it looks like registration for the CoD4 Multiplayer Beta is ready to roll for those in the US. A posting on the official Charlie Oscar Delta forums states:

"But we've been playing the beta internally, and it's so much fun we are dying to play with you. So... let's blow off waiting for the site and just consider this the countdown -- there will be a way for people to register for the beta starting 5pm PST tomorrow. Some of those will be playing as early as tomorrow night.. tick tock tick tock."

For those of us in the UK, that's midnight tonight, although the first wave will be open to North Americans only. Various appendages around the SPOnG office remain crossed that we Europeans won't be left out in the cold as Infinity Ward rolls the beta out to further users.

If we are left out, it will be a long wait 'til CoD4's probable November launch.