The Charts: Transformers Roll Up 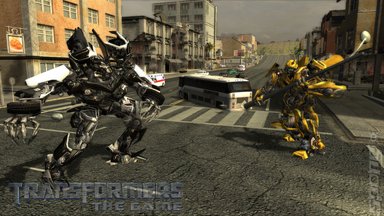 Activision's Transformers enjoys another week at the top of the Charts this week, but the question SPOnG's asking is: how is it faring in the new Individual Format Charts?

'Wha' huh? New charts?' we hear you cry! Yup, Chart-Track and ELSPA have introduced a new pair of Charts into the mix that follow games' performance on individual platforms in terms of both units sold and cash taken.

So, in the case of Transformers, the PS2 version appears at Number 5 in the Individual Format Units Chart, while the 360 version lands at Number 18 and the PSP version is at Number 34. The other platforms, alas, don't get a look in with Transformers.

Nintendo is (unsurprisingly, if you've been following the Charts) the first company to top both the new Charts, with Wii Play doing it for units and Pokémon Diamond for value. In the Individual Format Units Chart there are 16 DS titles, 10 for Wii, seven PS2 games, two PSP games, two PS3 games, two 360 games and one PC release.

Back in the regular All Formats Chart Nintendo is again enjoying Top 10 success. The indomitable Wii Play is up one place to Number 2, followed up by Brain Training, which equals its highest ever Chart placing at Number 3 and surpasses its sequel.

Pokémon Diamond and Pearl are the only two Nintendo games in the Top 10 to lose sales (both drop 20%), but Diamond still manages to hang in there at Number 4, followed up by More Brain Training, which is down one place to Number 5.

Ubisoft's Surf's Up breaks into the Top 10, riding the wave of the film's release up to Number 8 from Number 11. New Super Mario Bros. continues to hold up the Top 10 thanks to a 14% jump in sales.

Depressingly, the only three titles in the Top 10 that aren't Nintendo platform exclusives are film tie-ins, with Harry Potter and the Order of the Phoenix joining Transformers and Surf's Up at Number 6.

THQ publishes this week's biggest climber, with Purr Pals on the DS entering the Charts at Number 18 in its second week of release.