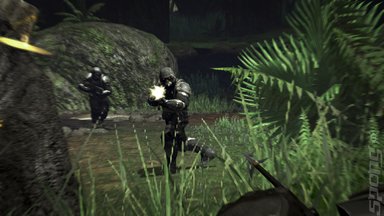 All Images (8) »
Speaking with delegates at the Edinburgh Interactive Festival earlier this week, the issue of which games we all saw at E3 inevitably arose.

One game which pretty much everyone who has seen it is raving about is the Propaganda Games developed Turok, which publisher Disney/Touchstone has just informed us is to finally be released early next year on 8th February, 2008.

The few previews that SPOnG has already seen of Turok, both on PS3 and 360, have simply blown us away. Not since seeing the first Jurassic Park movie can we remember being in awe (and slightly pooing our pants) at virtual dinosaurs flying towards us through lush jungle environs.

In the game, which makes wonderful use of Epic's Unreal Engine 3, you play as Joseph Turok chasing after your old mentor-gone-bad Roland Kane, but you somehow get waylaid in a prehistoric jungle full of flesh-hungry dinos.

For all the latest check out SPOnG’s dedicated Turok game page.


Note: One Million Years B.C. managed to both frighten and arouse some of the older members of staff but that's another issue.
Companies: Touchstone
Games: Turok