So is Fable 2 going to be any different? 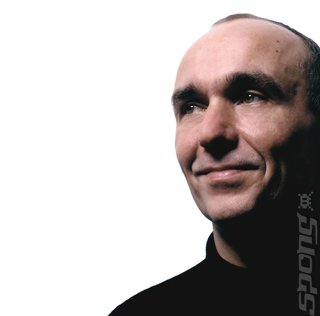 Molyneux: Open mouth, press play, priceless.
Following his recent Develop conference presentation of Fable 2 - Lionhead, well, head Peter Molyneux has once again laid his cards on the table regarding what his perceives as the genre he's about the redefine: the RPG.

Before we get to the email we received from the great man (yes, since we've played every Peter Molyneux game since ever, we think he's a great man) let's recap quickly on a few key points from Develop.

First of all, Molyneux had to point out that Microsoft Vista turned the laptop on which his PowerPoint presentation had been sat into a 'piece of modern art' - e.g. it melted the hardware in hibernate on the drive down.

Now, why is this a pertinent piece of information? Well, since Microsoft now owns Lionhead, and Vista is central to Microsoft's entire existence - you might have expected Molyneux to have glossed over the fact that Vista destroyed his latop rather than telling a room full of journalists and fellow developers. Nope - so, you get the idea that either the man simply does not care what comes out of this mouth, or he knows exactly what he's saying and the effect it will have.

The second relevant piece of information regards something that Richard Garriott told SPOnG during a Tablua Rasa preview. The question of combat systems came up. Tablua Rasa uses an almost arcade style of combat - lacking in the kind of button-mashing that according to Molyneux, "we (developers) hate". Fable 2 uses an intriguing one-button, context, proximity and earned-skill-based system.

When SPOnG told Garriott that we'd just walked out of a quick five minutes (yes, as opposed to a slow one; that's relativity for you), the ex-Lord British responded with, "Oh, great Peter said some really nice stuff about us last night, I'll have to remember to thank him". So, apparently Molyneux while disparaging about the traditional RPG, doesn't reserve his bile for the accepted Granddaddy of the genre.

Now read the following quote sent to SPOnG with all that lovely context:

"I find the traditional RPG either a mixture of a hugely long slog, the padding out of often poorly balanced features for tens of hours or an incredibly complex multi faceted mixing pot of meaningless and confused features where the true feeling of being heroic has been lost. What we are striving to do with Fable 2 is to give the player a true heroic path that makes you feel as though you really are playing the role of a hero or heroine through finely tuned game mechanics innovation and story and our combat system is a big part of that. But I would say that wouldn?t I?

P.S. Why do I let my big mouth do this every time?"

Possibly the same reason that he answered, "Because I've never made a great game... a game I consider great", when we asked him why - having been given squillions of pounds stirling by Microsoft for Lionhead - he continues to make games.

The question is, is that reason (a) because he can't stop telling the truth or (b) he's an excellent self-publicist who knows that in an industry based on safety it doesn't take much to cause a stir?

Whatever you reckon, at least there's still a character who can make great games and not be terrified to death about appearing to say the wrong thing. Like marketing people who aren't "excited" about every piece of fluff they have to pimp; politicians who talk in a straight line; sober London adolescents; or people who don't care about the platform as long as the game's good - they're a dying breed.

Fable 2, by the way, looks and sounds like an excellent set of ideas in the early stages of development. More on that next week.

deleted 15 Aug 2007 21:25
1/4
ok pete, im highly anticipating fable 2 and i enjoyed fable if a little small and an overall feeling of pointlessness was there, but please dont dismiss RPG`s , final fantasy 7, Zelda (SNES + N64) are 2 examples of games that let you feel like you were leading a hero through amazing stories, even if we go back to dungeons and dragons board games the sense of of being a hero was there as well, so although i am really looking forward to fable 2 i dont think your re-inventing the wheel!

and for the record i think peter doesnt get what he is saying, i think hes great for fantasy ideas but thats it.

A well-performing genre in the games industry today declared that they don't know what purpose the ex-Bullfrog head serves anymore.

"We used to like him", said a long-running role-playing game series who didn't want to be named. "He did some really nice stuff on the Amiga, like the one with the rollercoaster and that game with the cute little four-man death squad. But now we just think he overcooks his games like he does his press statements, all while biting MIcrosoft's pillow."

OptimusP 16 Aug 2007 12:50
4/4
So Peter just wants to make a less structured Legend of Zelda game, now why didn't he say so from the get-go...sheesh. Now if only he could make the first half hour not as boring to hell like the first game, it should be alright...i hope.
Posting of new comments is now locked for this page.