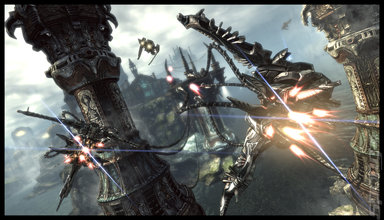 All Images (4) »
The DVD format is proving problematic for Unreal Tournament 3 on the Xbox 360 according to Mark Rein, vice president of Epic.

Speaking at the Edinburgh Interactive Festival, Rein said, "We'll compress some things. But you know, we may have fewer maps on the 360 version... Blu-Ray has definitely given us a lot of legroom."

DVD offers 9GB of storage space, less than a fifth of the 50GB offered by Blu-Ray.

Rein added, "If you think down the road, well maybe the next UT beyond this one, on Blu-Ray disc, we might fill the whole damn disc with all the cool stuff the mod makers make".

This comes just a couple of weeks after news that Project Gotham 4 is being restricted by the amount of space available on DVD.

In related news, Home Media Research said yesterday that in the States Blu-Ray movies outsold HD-DVD movies by two to one in the first half of 2007.

DVD, it would seem, is starting to show its age. So far the storage difference between Blu-Ray and DVD hasn't been too much of a problem for the 360. If, however, we're going to start seeing longer, beefier games on the PS3 thanks to additional disc-space, the issue could start driving consumers to Sony's buxom console.
Companies: Epic Games Microsoft Sony
Games: Unreal Tournament 3

Splitting a game over 2 or more discs is hardly next-gen. Blu-Ray is going to win this battle at least.