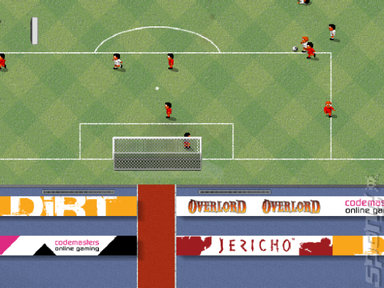 All Images (5) »
Codemasters Online has just launched the official Sensible World of Soccer website, kindly reminding us of what is clearly going to be the XBLA game of 2007.

Sensible World of Soccer brings all the classical elements of SWOS to both the older and the new generation of players, keeping all the original touches that made it one of the games of the early 1990s. For many, it defined that era of gaming.

Particularly, so it seems, for SPOnG?s very own Tim Smith, who claims ?I would have been the SWOS world champion if it weren't for that pesky (industry insider) Simon Byron and an offside goal."

SPOnG immediately sought a response from official Sensible World of Soccer World Champion, Simon Byron, who told us, ?He [Smith] would have been World Champion if he'd scored more goals than I conceded. He didn't. And no-one remembers the runners-up. Was he a runner-up? I don't recall.?

Smith soon responded, commenting that, ?Of course, the past is a foreign country... and bygones should be Byrons; when all's said and done it was a more innocent time - and I'm sure that Simon gave 110% over the ten minutes on the day for his cause - it's just a shame that the 10% entailed off-the-ball antics in a way that can only be described as Rattin-like! But, as I say, that was then but this is now and it's all water under the bridge.?

We see a once great rivalry soon being rekindled on the virtual Sensible World of Soccer XBLA pitch. Watch this space. And check the SWOS site straight away!

Yes you bloody do when you worked for the greatest one of all time ever (and did reviews for that Amiga Power thing).

Quill 9 Aug 2007 03:36
5/7
Tim Smith wrote:
Yes you bloody do when you worked for the greatest one of all time ever (and did reviews for that Amiga Power thing).

I'll not hear a bad word about the only magazine at the time to award average games with an average score (60% or lower). Frontier: Elite 2 - 96% (as per The One review)?? Pfft.

Amiga Power/Format will live in my heart forever.