The Charts: Nintendo Mops Up 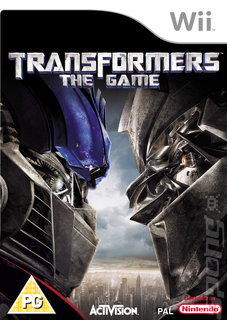 Seriously, though, who'd win in a fight between some Transformers and some Pokémon?
Nintendo dominates the top of the Charts this week, with eight platform exclusives in the Top 10 between the Wii and DS.

It's a multi-platform title, however, that rules the roost. Activision’s Transformers nabs the top spot after losing out to Pokemon Diamond by a narrow margin last week. Transformers' chart jump isn't all good news, however, as it drops 10% of last week's sales.

Diamond, meanwhile, sheds 20% of last week's sales, settling for Number 2 and, dare we say it, losing a bit of its shine. Diamond's sister title, Pokemon Pearl, manages to hold on to its position from last week, hanging in there at Number 3.

The reappearance of Mario Party 8 on retailer shelves – following its removal due to dubious content – bolsters Nintendo's Top 10 presence, re-entering the Charts at Number 9. The other title that boosts Nintendo platforms' ranks in the Top 10 is Cooking Mama from 505 Games, which climbs from Number 11 back up to Number 10.

Further down the Charts, Capcom's Resident Evil 4 shoots back into the Charts at Number 26 thanks once again to the Wii version.

Next week's only release to watch for is Atlus's Trauma Centre: Second Opinion on the Wii (a review of which can be found here), which finally makes a European appearance nine months after its US release.
Companies: 505 Games Atlus Capcom Nintendo Sony
Games: Cooking Mama Mario Party 8 Pokémon Diamond Pokémon Pearl Resident Evil 4 SingStar '90s Transformers: The Game