Get ready to destroy those controller buttons! 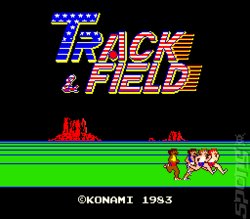 Microsoft has just sent over its August schedule for Xbox Live Arcade games with Konami?s arcade classic Track and Field heading up the summer roster, due for release on XBLA tomorrow. Yes!

While we anticipate blistering our fingers and thumbs on this 1983 classic videogame (and most likely destroying a few 360 controllers with rage when we fail to hit the perfect 45-degree long jump for the umpteenth time) there?s also a bunch of other games to look forward to over the coming summer weeks ? so it doesn?t really matter if the current sunny weather is just a blip after all as we?ll all be enjoying some hot and sweaty arcade nights!

The updated version of Track and Field for Xbox LIVE Arcade features the same button-mashing game mechanic as the original, and now enables up to four-player multiplayer competition on one Xbox 360 or over Xbox LIVE. It will set you back a mere 400 Microsoft Points. An essential purchase.

Other games due this August are SEGA's Ecco the Dolphin, Hexic 2 and War World and then for the rest of the ?summer? (does Microsoft know something we don?t about an Indian summer?) we?re due to get Geon: Emotions, Puzzle Quest, Jeff Minter's barking-mad and trippy Space Giraffe, Streets of Rage 2 and Capcom?s awesome Super Puzzle Fighter II Turbo HD Remix.

Here?s the full line-up along with a bit of Microsoft bumpf on each title:

To date, there have been over 45 million Xbox LIVE Arcade game downloads as of July, and the popularity of the service continues to grow. Over 100 games will launch on Xbox LIVE Arcade by year?s end, including dozens of original IPs and classic titles updated for this generation.