Tabula Rasa: The Power Of LOGOS 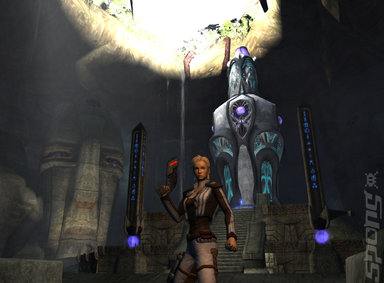 All Images (10) »
Thousands of years ago a bunch of ancient alien fellas discovered the key to a powerful science unifying all theories of physics. They... no, no, you can get out from under your desk. Not real aliens. It's all happening in Richard Garriott's Tabula Rasa, and SPOnG has some new screens lest you desire illustration.

So, anyhow, this nifty theory enabled them to develop LOGOS, a handy way to manipulate matter and force. The upshot of it was an unfortunate war between the Eloh (the ancient race in question), which wasn't such good news. The better upshot is that the abilities in question can be used to to give gamers spiffy super powers in Tabula Rasa. Silver linings and all that.

Anyway, to a look at the screens below to see what we're on about. When you're done, you'd better mosey over to SPOnG's recent interview with Richard Garriott, the godfather of the MMO and daddy of Tabula Rasa to learn more.
Companies: NCsoft Europe
Games: Tabula Rasa