Right - woot! The old one's are the old ones! 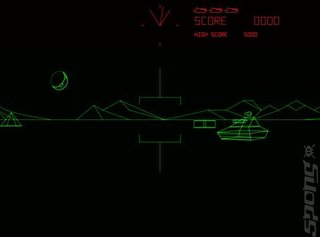 Battlezone: not vector graphics?
Games for old people (A.K.A. 'Classic Games) such a Asteroids and Tempest are brilliant and better than most of the old tat currently available - they also make good selling points to show off 'cutting edge' new technology. At least that's the line being taken by the SIGGRAPH Technology Conference (San Diego).

It's announced that the "world's first known use of a state-of-the-art laser projection system designed to show real-time vector graphics in vibrant, non-pixelated colour" is going to be used, " to play several classic arcade games on a giant projection screen nightly at the San Diego Civic Theatre from 6-8 August 2007."

The classic arcade games are Asteroids and Tempest and Star Wars, apparently "the only three to use vector graphics, drawn with lines instead of pixels."

So, Battlezone and Space Wars never made it then, uh?

Oh, okay then. But it doesn't stop there, apparently 'celebrities' will be playing the games. These celebs include:

way 6 Aug 2007 13:56
1/1
Ahh, yes, I remember discussions on the Vectrex forum, about playing vector games on an big screen, i.e. the entire surface of the moon. But it was concluded we didn't, unfortunately, have an laser big enough to do that (and probably also capable of destroying enemy military bases they might put up there. Now, if we can only get any future invasion of space invaders to line up there, we can have some really classic gaming ;) ). (Yes, I read the register too much).

Something else for Spong to pick up on (apart from that Toshiba 100Mpol 3D chip thread) is that Microvision and Motorola are to introduce an Phone with laser projector.