Wolfenstein Film On The Way

Where the hell is... bah, never mind 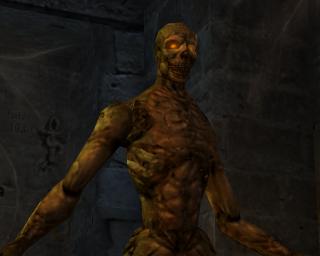 Your Mum.
All Images (3) »
Samuel Hadida, the producer behind the Resident Evil films, has secured the rights to adapt Return to Castle Wolfenstein into film.

Roger Avary, who worked with Hadida on Silent Hill, is attached to write and direct the film. Also under Avary's belt are writing credits Beowulf (which is being adapted into a game by Ubisoft), The Rules of Attraction and a little film called Pulp Fiction. He gets SPOnG's vote - well, some of it; some of us think that Pulp Fiction is in fact horribly overrated, cacked-out, tedium.

?I?ve been playing the character of B.J. Blazkowicz since the epic Wolfenstein 3D first bruised my brain and have ever since wanted to bring his adventures to life on the big screen,? Avary said. ?It?s time to bust some dams, storm some bunkers and blow up some bridges.?

The bunkers and dams in question would be back in the dark days of World War II. The game stars William J ?BJ? Blazkowicz as he battles a Nazi war machine that's taken to Bio engineering and dabbling in the occult. You can find out more on SPOnG's dedicated game page.

SPOnG's vote for playing Blazkowicz goes to The Rock. Either him, or Jason Statham. Not that we're bitter that he isn't playing Agent 47 in the Hitman movie.

Return to Castle Wolfenstein joins an ever-growing list of games getting adapted into film. As well as those already mentioned, God of War is getting the big screen treatment and the third instalment in the Resident Evil series, Extinction, is on the way.

Joji 3 Aug 2007 15:15
1/3
Another game to film translation that I think might not work well. What's wrong with these people? Why the hell can't they choose something decent like Legend of Zelda to do this to?

Directors etc are painting a picture that all games are about is shooting things, when they can be so much deeper than that. Half the time its a lot of BS like Bloodrayne and whatever.

Agent 47 was well chosen, as its in line with the kind of films like Leon and Golgo 13, that inspired it. It should be the best one hopefully, next to Silent Hill.

deleted 3 Aug 2007 20:43
2/3
Legend of zelda would be good in fact i would think a good choice for peter jackson seems as he is probly finished with his halo 3 movie stuff. as for game to film translations i agree that wolfenstien may not be great, but then again nazi war machines and sci fi worked ok for hell boy movie?