Sony gets a shot in the arm... well, on the green. 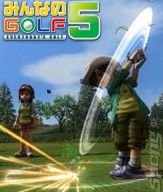 Sales info is always open to misinterpretation and, um, fiddling. Take the wonderful Minna no Golf 5 (Ą61,980 - Ł255) (which the UK will eventually know and love as Everybody?s Golf 5). More than 300,000 Japanese punters had apparently put down pre-orders for Sony?s game, but if that really was the case, around half of them were too lazy to get down to the shops during its first week on sale. According to Media Create?s official figures, only 152,379 copies of Minna no Golf were handed from retailer to customer in this, its first week on the shelves. Maybe the rest will remember to pick up their copies next week? Either way, it?s still decent performance ? especially for a PS3 game in Japan, where the console?s user-base is only a little over a million-strong.

With Wii Mario Party 8 (Ą5,800 - Ł24) being regularly, almost incontinently, advertised on Japanese TV over the past fortnight, it?s no surprise that the game has landed at the summit of this week?s Japanese sales chart.

In its first week on sale, it sold in significantly greater volume than Minna no Golf 5 (which lies in second place) ? listen closely and you can hear the distant din of 264,953 households full of happy families playing party games in Mushroom Kingdom.

Taking up third and fourth place in the chart are two third-party DS games: Namco?s Taiko no Tatsujin DS and SquareEnix? It?s a Wonderful World. Both are fantastic games; it appears that third-parties are really getting to grips with DS development now, and particularly in the case of It?s a Wonderful World, we?re beginning to see more imaginative use of the double-screen setup. In this SquareEnix game you control two characters simultaneously, one on the top screen with the d-pad and t?other on the touchscreen with your trusty stylus. Meanwhile Taiko no Tatsujin turns the DS into a miniature Drum Master arcade machine, complete with two freebie drumstick styluses. Nifty titles, the pair of them.

The most remarkable thing about this week?s most popular games in Japan, however, is that a brace of Western titles have assailed the Top Ten. Capcom has published Rockstar?s GTA: Liberty City Stories in Japan on the PSP, scoring first week sales of 44,939 copies, while Japanese publisher Spike has released Oblivion here on the 360 and notched up a similarly impressive first week tally of 40,168 sales. A bit of globalization here, perhaps?

deleted 3 Aug 2007 20:49
1/1
well as the japanese seem to like western games currently how about the japanese getting some more of there outlandish titles that dont see the light of day in west over here, gamers have matured and as that has happened in japan and they now accept western games more openly we in return should be given the oppurtunity also.
Posting of new comments is now locked for this page.