But it's OK, it's not violent. 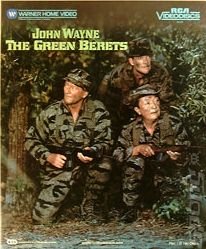 Shooting things is non-violent. Ask the Duke.
According to the New York Post, the U.S. military recruitment game America's Army, "...will be the first military-oriented video game to get out of the R-rated home-recreation world and into the faces of G-rated patrons".

Huzza then. While we're actively banning adults from making their own minds up about video games, it appears that targeting (or aiming) military training outings at "kids ages 9 to 18" as "the primary audience" is okay. That demographic comes courtesy of developer, Global VR.

Apparently the game "will be working the indoor-pistol range, launching grenades or pulling sniper duty based on routines the Army uses for training."

But fear not for the youngsters, because, The Post quotes Global VR programmer Mike Kruse as telling us, "We're only shooting targets. There's no blood, no death, no violence".

So, that's OK then - shooting weapons is NOT violent.

That's certainly what my priest told me at my first Holy Communion.