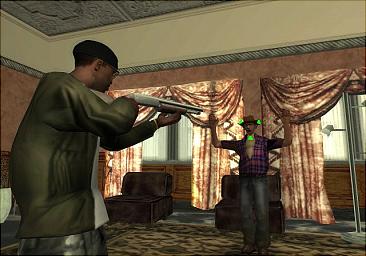 All Images (5) »
Many of us know what it is like to leave a job behind due to the uncomfortable mixture of overbearing, interfering bosses and/or inefficient and demeaning ways of working. However, most of us don?t have bosses that are (a) interesting enough to bother writing about after we?ve escaped or (b) in the public eye to the extent that Dan and Sam Houser and their team at Rockstar games are.

A disgruntled ex-Rockstar employee is certainly aware that tittle tattle about his ex-employers at the Grand Theft Auto factory is of some interest to gamers, with Rockstar's former web producer Jeff Williams posting in embarrassing detail on his blog about his time at Rockstar.

?This is a company that seems to be in the news a lot lately, so there seems to be no shortage of interest,? writes Williams. No kidding!

Of course, the guys at Rockstar have come under increasingly closer scrutiny in recent years, following the massive successes of the GTA series, as well as the highly-publicised scandals surrounding the Manhunt games and the ?Hot Coffee? hidden sex scenes in GTA: San Andreas (pictured here).

You may also remember that SPOnG reported back in March of this year on ?Rockstar: The Rise and Fall of a Dynasty? ? a detailed look at the history of the company and its key players.

Williams seems to attempt to dismiss Rockstar as a one-trick-pony, suggesting that the company is overly reliant on the success of the GTA series, conveniently managing to forget Rockstar's more recent successes with videogame classics such as Bully, Table Tennis and the ever-popular Midnight Club series.

With all that in mind, here?s a few choice excerpts from what Williams has to say about his time at Rockstar on his blog:

?Every Rockstar project turned into a huge clusterfuck. I mainly blame this on a horrendously inefficient company structure combined with a few individuals who thought they were hot shit but really didn't know anything about either video games or marketing. By that time, Rockstar was arrogant to the point of absurdity.?

Ouch! Can you feel this man?s pain? It continues:

?Every project involved at least four different approvals ? ?Scott? [William?s boss], Jenny Gross, Dan Houser, and Terry Donovan. If any one of them requested a change, the project would be sent back. Often they didn't communicate and didn't agree with each other, so we'd do one change only to have someone else up the chain ask us to change it back. Then an argument would inevitably ensue. And when I say "argument", I mean "screaming at the top of your lungs and throwing objects around the office" type of argument.?

Commenting on Manhunt, Williams says that he ?didn't support Manhunt's release" and that "it may sound surprising, but there was almost a mutiny at the company over that game. It was Rockstar North's pet project - most of us at Rockstar Games wanted no part of it. We'd already weathered plenty of controversy over GTA3 and Vice City - we were no strangers to it - but Manhunt felt different?[it] just made us all feel icky. It was all about the violence, and it was realistic violence. We all knew there was no way we could explain away that game. There was no way to rationalize it. We were crossing a line.?

Referring to the well-publicised 'hot coffee' scandal, Williams goes on to state that he, along with a number of employees, knew about the sex scenes in question and that one of his colleagues, ?just assumed the scenes would be removed before the game was released. Technically they were, but they were still accessible in the game for the technologically apt. One of Rockstar's recurring problems was underestimating the technical ability of its PC game customers. In short, I don't think "hot coffee" was intentional - or at least I don't believe those scenes were intended to be found. Rockstar just didn't think anyone would go to the trouble.?

Williams claims that he left the company for personal reasons and because he ?became infuriated with the company's inefficiency and unwarranted arrogance. Not to mention their lack of taste in video games! Rockstar thought they were better than everybody else, but they weren't good enough for me.?

You can read William's full and frank account of his experiences at Rockstar over on his blog.

SPOnG has spoken with Rockstar in the UK this morning who told us in no uncertain terms, "no comment."

Let us know what you think in the forum ? Does Williams make any valid points? Or are these merely the bleatings of a disgruntled man?

Hypnotoad 27 Jul 2007 00:03
1/2
You only need to look at how Rockstar was handling press a few years ago if you need more proof of the companies arrogance. I recall 2 E3's ago (I think) they had a group of buses all parked inside the convention center and would only let 'specially approved' press inside. Once inside, you couldn't film or take pictures of anything. They just thought they were so untouchable.

Look at Rockstar today though. Year's ago you would have been lucky to get a sniff of the latest GTA game this far out and now I'm seeing coverage after coverage of this game from every web site around. I can smell the fear a mile away - if GTA isn't a huge runaway success, goodbye Rockstar and Take Twe. Reality check, bitches.

Not that most of what hes saying isn't true.

If Rockstar is arrogant, and they surely are, then the blame lies solidly on the heads of the game buying public, parents who buy their kids whatever they want, and other developers. GTA is a monster, its defined its own genre, and other developers will be using its formula well into the next generation of games and possibly beyond. His comments concerning Manhunt are blatantly self-serving and wishy-washy as well as being pretty meaningless, the guy had almost nothing to do with it, he was merely a well-placed fly on the wall. The one interesting tidbit referenced here (for those not concerned with R*'s inner soap opera) was about Hot Coffee being completely unintentional, used to underline the level of arrogance.

GTA will likely continue to be a runaway success, so their level of arrogance isn't likely to decline. And I'm not even much of a R* fan, never so much as played GTA 3, San Andreas (mebbe 5 min. or so) or Bully (though I probably will when it comes to 360). I'll also object to grouping Midnight Club with Table Tennis and Bully as a classic. Table Tennis IS, Bully might be, but Midnight Club...is just another tuner game with little originality or reason its any better than any of the other tuner games that don't suck (many tuner games do).