Call of Duty 4, Star Wars, Fracture and something for the kids 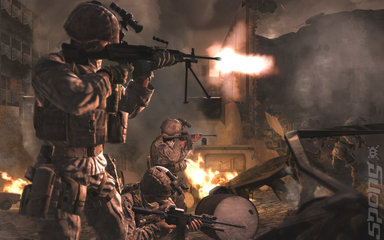 Respect is due to Activision: clearly recognising that this year?s bowdlerised E3 had all the impact of a wet fish, it decided to take a day to show its top titles for 2007 to the retail trade ? and invited SPOnG along too. Sure, there was some stuff I?ve seen before ? the demo of Enemy Territory: Quake Wars, for example, was a much less in-depth affair than some I have covered in the past, and I did see Tony Hawk?s Proving Ground at E3. But beyond that, this is what I saw.

Man, I can?t wait for this game to come out ? even without the WWII setting, it clearly retains that harrowing CoD ambience in which the bullets ping around you, the hellish chaos of war prevails and the whole experience borders on the terrifying. Unfortunately, I can?t vouch for the much-vaunted storyline which, Infinity Ward?s Grant Collier says, will drop Hollywood-style cliffhangers. But I did get to see a bit of the commendable variety which exists in the levels.

For example, there?s one set on the deck of a ship packed with containers ? a perfect setting for the sort of combat which involves ducking and diving. In one of the levels - in which you play as an SAS man - the demo showed our man making it close to the superstructure before being pinned down by concerted machine-gun fire from the bridge. At that point, a handy helicopter appeared and strafed the machine-gun into silence.

I also saw a level called ?All Ghillied Up?, set in Poland, in which you and a mate are dressed in incredible ?ghillie? camouflage which renders you near-invisible ? perfect for a spot of sniping, and reminiscent of Metal Gear Solid without the clunkiness.

Then I saw an utterly frantic level called The Bog, in which you and your squad are pretty much pinned down by baddies, and in particular a group of guys equipped with rockets on an overpass. You must take out hundreds of enemies, make your way to the roof of one of the bombed-out buildings, pick up the Javelin rocket and take out a load of tanks. The Javelin fires some sort of bunker-buster affair, which goes straight up in the air, then whoomphs down on its target. It looked very satisfying to fire.

But the most outrageous level I saw was called ?Death from Above? and was set in Chechnya. It put you at the controls of the weaponry on an AC-130 gunship. This one was conducted in a night-vision, top-down view, which looked just like that footage you always see on CNN when the Americans have just invaded somewhere. You?re essentially supporting ground troops in this level, so it?s important to avoid the friendly fire (although you?re playing as an American, so a bit of that would be entirely realistic), and to use those heavy machine-guns and rockets judiciously.

Activision also mentioned that you will be able to acquire ?special skills? as you progress through the game, one of which is martyrdom. Alas, this doesn?t mean you get to play as an Al Qaida operative ? but when you die, you will do so with a grenade in your hand which has had the pin pulled out?

According to Activision Call of Duty 4 will arrive in early November or thereabouts.

This one, alas, won?t make it this year (it?s due next spring), but it does look like a potentially huge title. Essentially, it?s the closest thing we?ll ever get to a new Star Wars film, according to LucasArts. It?s set between Episodes 3 and 4 and, for at least part of the game, you?ll get to play as Darth Vader?s secret apprentice.

We didn?t see much of The Force Unleashed, but LucasArts said that it includes two new technologies ? one of which, entitled Euphoria, is pretty much a form of AI which learns your moves and varies its behaviour to counter them, as far as I could make out. Could be dangerous ? developers who have tried to put ultra-rigorous AI in games in the past generally found that it made those games unplayable. The other technology is known as DMM ? digital molecular material. In other words, if you smash a piece of glass in the game, it will react like real glass, wood will splinter like its real-life counterpart and so on.

From the little I saw, there was plenty of lightsabre-play and use of The Force in the game; it should make hardcore Star Wars fans very happy. It will be on the next-gen consoles plus the PS2.

Here?s another one from LucasArts that looks very odd indeed, and is also set for 2008. Set in the near future, its plot dictates that the world has split into two factions: cyber-enhanced humans and robots who fight each other using weapons that deform the terrain. To our eyes, it looked like one of those efforts that could either bring about an entirely new form of gameplay or end up hopelessly confusing. It will be on PS3 and Xbox 360 only due to the processing power required for all that terrain-deformation.

There were plenty of games aimed at youngsters on show ? I know you hardcore types may sneer, but we?ve all got nieces, nephews and so on. Probably the biggest of those titles is Lego Star Wars: The Complete Saga, which marks the redoubtable franchise?s Wii debut. It makes extensive use of the Wii Remote ? even using the motion-sensing to let you jab your lightsabre when you play as a Jedi. There also seemed to be more emphasis on construction, including using a Wii Remote gesture to assemble puzzle-solving objects from Lego bricks in super-quick time. It will have 20 new characters and 12 new levels, and is due in November on Wii, Xbox 360, PS3 and DS.

Activision will also release Spider-man: Friend or Foe, a Spidey game aimed at the under-12s (which makes sense, as they are the most avid Spidey fans in existence). This was described as: ?Like Lego Star Wars in the Marvel universe?. And then there?s Bee Movie, the game of the film which could be the next Shrek. Silence your hoots of derision ? the film will star, and has been written by, none other than Jerry Seinfeld, whose extended money-counting holiday finally seems to be over. For that alone, I should applaud it.

Bee Movie is one of those affairs in which a bee escapes the hive and traverses the real world, and some of the gameplay did look more imaginative than you usually find in such games. One level, for example, involved dodging raindrops by hiding undercover, picking up air-currents and making judicious use of bullet-time.

Activision just overtook EA as the number one publisher in the US ? whether it can sustain that remains to be seen, but the company does look like it has some potentially big sellers waiting in the wings. And whatever you think of games aimed at kids, they are big money-spinners. Come on, it?s always good to see someone taking on the behemoth that is EA, isn?t it?
Companies: Activision
Games: Bee Movie Game Call of Duty 4: Modern Warfare Fracture LEGO Star Wars: The Complete Saga Spider-Man: Friend or Foe Star Wars: The Force Unleashed

actionmonkey 26 Jul 2007 09:26
1/1
Spong's right about the AI, it's not like a human could work out what your strategy was going to be in a fight. The AI for games nowadays is fine. All I'd like to see is more variety in the patterns of behaviour.