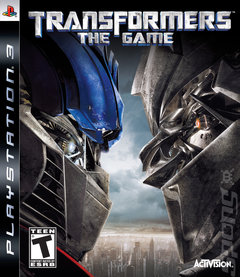 Seriously, who'd win in a fight between Harry Potter and Megatron?
Transformers rolls into the Charts this week, but it's not enough to take down the might of Harry Potter.

After the chaos of midnight bookshop openings around the country on Friday, giddy enthusiasm for the kid with the lightening scar has kept Harry Potter and the Order of the Phoenix at Number 1 for a fourth week.

Activision's Transformers, which launched a week before the film's release, has rolled, flown and roof jumped into the Charts at Number 2, dislodging More Brain Training from Nintendo.

More Brain Training hasn't fallen far, however, with the DS sequel slipping to Number 2. It's in good company, with Big Brain Academy: Wii Degree debuting at Number 4 and the original Brain Training resting at Number 8, over a year after its launch. In fact, the Top 10 features no less than five Nintendo platform exclusives, with the brainy titles joined by Wii Play at Number 5 and 505 Games' Cooking Mama on Wii and DS at Number 9.

After an apt three weeks at Number 3, Activision's Shrek the Third ? which is bolstered by the PSP release - slips (wait for it) three places to Number 6.

At Number 7 is yet another licensed property, with 2K Games' The Darkness getting boosted a place by its PS3 release. If you're not quite sure why people are buying The Darkness, have a gander at SPOnG's review.

Nintendo's Mario Party 8 for the Wii obviously hasn't been entirely pulled from retailer shelves thanks to its offensive content, as it hangs on in the Charts at Number 30.

Next week keep an eye out for Pokémon Diamond and Pearl on the DS and Guitar Hero: Rock the '80s on the PS2.
Companies: 2K Games 505 Games Activision Nintendo
Games: Big Brain Academy Cooking Mama Dr Kawashima's Brain Training: How Old Is Your Brain? Harry Potter and the Order of the Phoenix More Brain Training from Dr Kawashima: How Old Is Your Brain? Shrek the Third The Darkness Transformers: The Game Wii Play