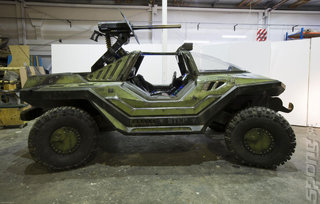 Remember the Halo 3 film short that SPOnG showed you as part of our E3 coverage? If you do, you might remember that in amongst the battle preparations depicted, there was a Warthog sat in all its non-CG glory. Well, according to Bungie, it was no prop.

"Um. The dudes at WETA made a Warthog. I don?t mean that they made a big plastic thing that looks like a Warthog. I mean they built a fully-functioning, four-wheel steering, powerful, off-road vehicle with a machine gun on the back. At the correct scale. If you live near Wellington, New Zealand, you might even see some crazy machine-shop dude from WETA fishtailing around your base, ahem, I mean neighborhood."

"What?s it for? Well, a couple of things ? one of which will be one of the shorts coming from director Neill Blomkamp. We sort of blindsided you guys with the first short (Arms Race) ? it had little to no context or explanation, but when you see it as it was originally intended ? as part of an overall narrative, you might just pee your pants. And if you don?t, then the picture below will certainly cause some leakage."

If you missed Blomkamp's original Halo 3 short, you can see it on SPOnG right here. When you're done, you can read up on the game over on SPOnG's dedicated Halo 3 page.
Companies: Bungie Microsoft
Games: Halo 3

Joshua metzler 9 Aug 2012 05:08
1/1
How much would this fully working warthog set me back?
Posting of new comments is now locked for this page.