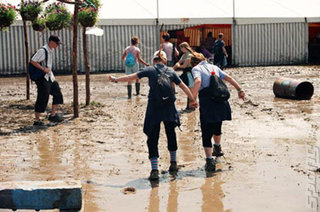 All Images (6) »
Multiplay - organisers of the largest UK gaming LAN events ? has sent word that we are entering a ?new era for gaming exhibitions? next month, with what they are billing as the ?Glastonbury of Gaming" ? a massive LAN event at Newbury Racecourse on the weekend of August 10th -13th.

Hopefully the event will be unlike Glastonbury in that it WON?T feature any has-been pop icons, vermin and disease-riddled ?toilets? or dodgy geezers trying to sell you drugs (OXO cubes) at over-inflated prices. This is altogether a good thing.

?i31, in association with Samsung, will be the UK's largest gaming LAN and industry exhibition this summer with up to 1,500 "Bring-Your-Own-Computer" (BYOC) spaces and 1,200 square metres of interactive exhibition space. The Samsung World Cyber Games National Finals are being held at the event which compliments the big-name exhibitors and cash prize tournaments. With over 80 hours of non-stop gaming and social activities spread across multiple venues and with most of the attendees camping on site,? Multiplay informs us.

?Anyone can come along and play in the World Cyber Games and potentially be part of the UK team at the World Finals held in Seattle in October. When tournaments are not in progress, the PCs and Xbox 360s on the Samsung World Cyber Games stand will be available for open play.?

The event is backed by a number of leading PC gaming companies such as Asus, Packard Bell, Intel, Scan, Philips, Crucial, Antec and many more offering games exclusives, prizes and hands-on demonstrations of new games and hardware technology.

"This is the largest and most interactive exhibition we have ever organised" said Craig Fletcher, Managing Director of Multiplay. "The BYOC gaming LAN is usually the biggest aspect of the event but at i31 the exhibition is giving it a run for its money! There's so much to do whether you're taking part as a BYOC participant or if you're just down for the day as a spectator - it's becoming more and more of a festival of gaming with each event we run."

Guys from Activision and developer Splash Damage will be on hand giving a live demonstration of the awesome Enemy Territory: Quake Wars (pictured), THQ will be showcasing Frontlines: Fuel Of War and EA will be showing off Crysis. Also giving live talks are Vivendi with World in Conflict and UbiSoft with the development team behind Ghost Recon Advanced Warfighter.

Also, Cheryl Cole and Sarah Harding from the hit pop band Girls Aloud will be joining in the World Cyber Games action, courtesy of Samsung. Bah! Forget what we said about has-been pop icons?

To find out more about i31, the World Cyber Games and the i31 Interactive Exhibition check out Multiplay.co.uk

Rod Todd 23 Jul 2007 15:43
1/3
Are we entirely confident that an organisation that can't tell the difference between "compliment" and "complement" can should be trusted to run a hall full of smelly geeks.

Also, calling Girls Aloud - with 15 consecutive top-ten singles, and a number one this year - "has beens" just shows how "with it" you really are.

(Still. Would though. Must find out what day they are on so we can take pics/stalk them....)

deleted 23 Jul 2007 21:43
3/3
If this is just another excuse for John Carmack to show off a game engine based on textures(Mega/Tera or any other world he finds cool), then count me out!!
Posting of new comments is now locked for this page.