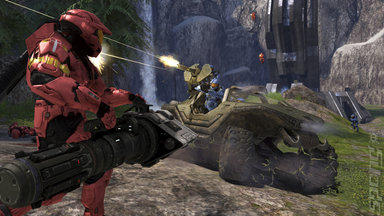 While Halo 3 will feature a two-player co-op mode, it will not be online. Instead, it looks like it will have to be played via split screen or a LAN connection.

"We're not dumb. We know that people want it and we're trying to make it happen. I think the biggest problem for us for online co-op is that we have a situation where you can be in a Warthog with five troops, almost a mile away from the other player. That's a significant challenge. And there's lots of design things you could do to prevent that from happening, but they would make it not feel like Halo anymore. If we can make it happen in a way that works well, we will - and if it works badly, we won't."

The possibility that an update may be issued to allow online co-op after the game's release hasn't been ruled out. For now, however, it looks like we'll have to settle for playing Halo 3 co-op locally.

It must be said that SPOnG has niggling doubts about Bungie's reasoning. If the lag across the Internet is acceptable for a deathmatch then why is it unacceptable for team-based cooperative games? We shall find out.

Granted, it's easier to communicate what you're doing from the same room, but Microsoft didn't release headsets purely for us to natter about what's going on in Hollyoaks. We have to wonder whether there's an underlying technical reason Bungie hasn't told us about...

For more on Halo 3's multiplayer functionality, have a look at SPOnG's impressions of the multiplayer beta.
Companies: Bungie Microsoft
Games: Halo 3

hollywooda 19 Jul 2007 09:21
1/5
I dont mind if they miss online features out to concentrate on hitting deadlines & making the single player experience awesome, Online features can be downloaded as patches later so no probs there.

deleted 19 Jul 2007 09:45
2/5
yeah the single player/offline co-op on halo 1 kicked halo 2`s arse, so halo 3 better perform for me. if it doesnt then i will get angry about online co-op
more comments below our sponsor's message

Hypnotoad 20 Jul 2007 00:17
3/5
This has GOT to be a PR stunt. Online co-op has been the most wanted feature in Halo since the first. People were CRUSHED when Halo 2 came out without online co-op. Now Bungie, heralded to be producing the greatest game of all time, have the ultimate co-op story line with Master Chief side-by-side with the Covenant's Arbiter, and they haven't built the entire experience from the ground up with co-op in mind ala Gears of War? You better be f**king kidding me Bungie.

I'd be expecting Bungie to pull a 'Hey everyone - we heard your cries & plees, pulled the extra long hours and made online co-op happen! WE'RE THE BEST!!!' enjoying all of the extra fever pitched publicity a last minute announcement like that would garner.. If not, this is the greatest over-sight in the history of videogames as we know it.

Nicholas Hyett 20 Jul 2007 16:15
4/5
I personally do not want online co-op, for me online co-op has been nothing but problems with games, it is not as responsive, it is difficult to talk to another player etc.

But seriously i prefer to have your mate with you when you do these sort of games and there is nothing more fun that sitting next to one of your mates and having a laugh while you play the game. I have been waiting for another game to come out for the 360 with this feature and nothing apart from gears of war is like it and it sucks. Co-op shooters in my opinion are useless online as there is no fun in it for me. Bring back the offline co-op shooters.

By the way anyone thinking that i mean all online in general, that's not what i mean, Halo 3 Beta kicked ass, i loved every second of it. I just mean online co-op not all multiplayer games.

hollywooda 20 Jul 2007 16:21
5/5
I think Online co-op is better?... yer ok having ur mates round is cool, but if u do Co-op online u dont have to share a screen, i hate using split screen i always get confused & unless u've got a 50" screen it hard to see whats happening. Gears online Co-op fcuking rocked!, it's just a shame u couldn't have a four man squad. If u like Co-op games then u'll LOVE Army of Two check it out on Gamestrailer.com or XBLM they have some trailers looks f**king awesome!...
Posting of new comments is now locked for this page.