Games of E3: The Return of Turok 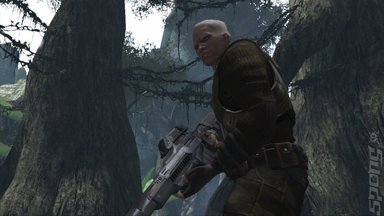 You may remember that SPOnG’s Steve Boxer enthused about Propaganda Games’ newly resurrected Turok back in January of this year (you can read Mr Boxer’s fully detailed first look at the game right here). At E3 this year, I got the opportunity to see if I agreed with him.

I can only say that should I have had a smidgeon of doubt that Steve was right about Turok being a return to form for the franchise, then I owe him a full and frank apology. This is an entirely new Turok set in a futuristic world riddled with dinosaurs and other frighteningly real nasties, in which you play Joseph Turok.

This game – being published by Disney’s ‘grown up’ brand Touchstone Entertainment early in 2008 – was easily one of the most polished and truly next gen shooters on show at E3 last week.

For those, like me, that bought an N64 purely to play the mighty Turok 2, only to be bitterly disappointed by the shockingly poor sequels since, it is surely something to celebrate that the dinosaur hunter is back in blazing form.

And yes, I realise that E3 this year had a veritable glut of high-quality, finely-tuned and carefully-polished shooters – Halo 3, Crysis, Haze, Timeshift, Blacksite: Area 51 and Call of Duty 4, to mention but a few, are all going to be essential must-buy games later this year – yet there is something about the new Turok that sets it well up in the same league as the aforementioned AAAs. Enough in the game is new and different to those other titles to warrant any gamer's attention early next year.

I could tell you that the game “blends elements of action and stealth in a prehistoric world” which is kinda what it does, though that would be like describing Nirvana as ‘a rock band, in the grunge tradition’.

The devs at Propaganda have completely achieved that eerie, uncomfortable sense of being stuck in a thick jungle, being stalked by Turok-hungry dinos.

Watch out for our fully detailed Turok preview very soon.

From what I can see of this game, though: future, robots, space = cliché. It needs to go back to its roots and be a proper unique game, not a wannabe Halo with the Turok name.

Things that were good about Turok 1 and 2: big (and small) unique weapons, big special effects, dinosaurs (which do look good in this game), gore, dismemberment, clever artificial intelligence, maze-like levels, cinematic scenes (which this game has, too).

I haven't seen much of this game, obviously, but it needs to go back to its roots. Anyone can design a robot or a spaceship, but why bother, because it's been done a million times. I miss Turok, and even feel its sequels were underrated. They need to bring the proper Turok back.

The mistake I feel they made with the last game (can't remember if it was, really, the series faded away and I lost track) is that they seemed to be obsessed with the idea that this was a "new generation," instead of simply improving on the unique aspects of Turok that made it stand out in the first place. Don't make the same mistake.

Most people would disagree (because it isn't what you've been told), but I found Turok 2 to be better (for its time) than Halo 2 was. So I would even say that making an average Turok game would disappoint me even more than not making one at all, because it would point it even moreso in the direction of being an average game franchise, when, based on the originals, it never deserved to be.

seems a bit moronic, to be frank

I never had an N64, I liked the look of Turok 2, so I bought one. I would call it successful marketing of a good game.