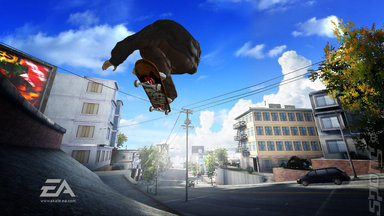 SPOnG’s E3 team has returned from Min-E3 in Santa Monica last week and I’m glad to report that not only is the new format for the show workable, its actually a lot better – in terms of the basic logistics of publishers being able to present journalists with executive interviews and game demos with producers and developers.

We’ll be rolling out our E3 previews, first impressions and exec interviews in the coming days and weeks, and the really good news is that there’s a lot for gamers to be getting excited about this year. Yes, that’s 2007 folks, because the real good news from this year’s show is that many (if not most) of the major publishers present and showing off their wares have some truly incredible games ready to release this coming autumn and winter.

I’ve already told you a little bit about my first impressions of my first half of E3 – including Bethesda’s breathtaking Fallout 3, Vivendi’s reinvigorated Timeshift, the continuing innovation from Nintendo’s displayed via Miyamoto’s Wii Fitness demo as well as some very well timed innovation from Sony Computer Entertainment with the M.C.Escher-a-like Echochrome for the PSN downloadable service. Here’s the first of a few quickfire first impressions of the other top games which really blew me away at the tail end of the show last week, starting with EA’s Skate (pictured).

I finally got a little hands on time with an almost complete version of EA’s Skate, due for release this coming September, and was not in any way disappointed. In fact, if it weren’t for those pesky game design gods at Bethesda, I really would be tempted to suggest this for game of the show (Fallout 3 claims that accolade, by a country mile).

Still, playing Skate in the relaxed company of affable game producer, Jay Balmer, was definitely one of the highlights of my show. The controls flow beautifully (no tricksy combos to remember here!), the open-ended cityscape of ‘Sanvanalona’ is an immense skater’s wet-dream, and Danny Way’s dream skatepark (a real version of which is currently being built by Way himself in Hawaii) really does have to be seen and skated to be believed.

If there is any slight concern about Skate, it is that the controls - while perfectly intuitive and amazing - are so very different to that other skate game on the market, that it may take a while to win over the mainstream, casual gamers and non-skaters to the experience. EA's Balmer was very keen to stress that he felt there's plenty of room in the market for the two franchises to co-exist, but then, he's such a nice guy that he would say that.

Whatever. Roll on September.

Check the latest batch of Skate screens right here and watch out for our fully detailed preview of Skate in the coming days.