Time for game translators to get their acts together 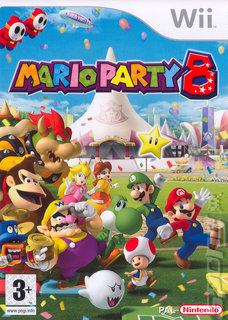 All Images (2) »
Mario Party 8, which was only released on Friday, has been pulled from U.K. retail for what is being termed as offensive language: yet another 'spastic' reference.

In an announcement on its website Nintendo states, ?Unfortunately we have discovered that a small number of games contain the wrong version of the disk due to an assembly error. We have therefore decided to recall all copies of the game from UK retailers so that this mistake can be corrected.?

What it does not state, however, is that the ?wrong version? contains the words, "Magikoopa magic! Turn the train spastic! Make this ticket tragic!?

We've not played the game to this level as yet, so we don't know whether or not the train in question does actually exhibit spasticity. If so, then it's fair enough of course.

The word no doubt found its way into the game in the translation from Japanese to English. SPOnG contacted Nintendo to find out how such an error could have slipped through quality assurance and what's being done to ensure the mistake isn't repeated, but no comment was available at the time of press.

This comes just a couple of weeks after Ubisoft's Mind Quiz was pulled from retail for containing the phrase 'Super Spastic'. Frankly, SPOnG's unimpressed by the word finding its way into two games in one month. We certainly expect better from a AAA release from Nintendo.

It makes us miss the days when the type of mistranslation that slipped through the QA net was the likes of 'Japlish' phrase, "Your fists of evil are about to meet my steel wall of niceness", in Fatal Fury Special.


A spokesperson from national disability charity, Scope, commented to SPOnG, "Although this term might not be as offensive everywhere as it is here in the UK, there is no excuse for releasing a game in this country including this word. Many disabled people and their families will have taken offence at this.

"Games such as these have a wide-reaching impact, often spanning international communities, and it is important that they are universally acceptable, inclusive and not offensive.

"Scope would like to make it clear that language such as this is not acceptable, it is divisive - especially where it is repeated within communities - and it is considered by many to be extremely offensive. Computer game manufacturers should take steps to monitor the use of language in their games more closely in future."

As for the future of Mario Party 8, Nintendo says, "We will re-launch Mario Party 8 in the U.K. as soon as possible and will announce a new launch date shortly. We very much regret any inconvenience caused."

irritant 16 Jul 2007 13:05
1/16
Hmm. I wonder when someone's going to spot that the UK release of Elite Beat Agents on DS also has an "offensive" word left in from the US version. One of the characters in the cutscenes for the "Red Carpet Premiere" mission is called "Mr Fanny" (as he was in the US version released oh so long ago).

This begs the question why us UK folks are made to wait 8 months for a game to be "localised" from the US version when they don't make a single change. In the case of Elite Beat it's not even the case that the cart is multi-language, either - there's a different cart per European territory, so why don't they just launch the English language versions of games worldwide at the same time and make the countries that aren't thoughtful enough to speak English do all the waiting?

Tim Smith 16 Jul 2007 14:18
3/16
irritant wrote:
Hmm. I wonder when someone's going to spot that the UK release of Elite Beat Agents on DS also has an "offensive" word left in from the US version. One of the characters in the cutscenes for the "Red Carpet Premiere" mission is called "Mr Fanny" (as he was in the US version released oh so long ago).

Now, I've got to admit to a vested interest in the whole 'spastic' as offensive discussion. This relates to a close relative - so it's possible that I'm not entirely objective about the entire thing. Which is why I didn't write either story.

That vested interest stated, I've got to say that the use of 'spastic' to mean 'worthless', 'stupid', 'broken' or 'sub-human' is offensive.

Not spotting this in a game is at best a fault in process and at worst mean-spirited.

As I say, I'm not objective and have had this discussion again and again and again... and I'd expect to keep having it until people who don't have direct experience of cerebral palsy get their lazy, self-satisfied, small-minded fannies off their seats and go and get some. That way, you lose the fear of disabled people and start seeing them as 'people'.

Either that or we start introducing the phrase "You played that like a cancer-victim! I pwn'd you, you Cancerer!" you know, for the laugh.

irritant wrote:
This begs the question why us UK folks are made to wait 8 months for a game to be "localised" from the US version when they don't make a single change...

It's all about publishing and distribution rights. However, that is a bloody good question which I will steal and claim as my own.

Worse? Why, what does it mean in the U.S.A.? Something good? That would be a first.

Joji 16 Jul 2007 14:22
5/16
I think you are missing something, Irritant. Use of certain words in english in the u.s and u.k differ. In the u.s it seems okay to say spastic or retard, but here it's frowned upon. This is one thing that is never pointed out and its impossible to please ever language region a game is released in.

This is the big and worrying problem though, the bbfc etc can't police all game content, when so many games are released on a weekly basis. It would take a vast legion of testers to even try. If this kind of stuff continues to happen, we could see many more games being held back.

Fanny means the opposite of what it does in the u.k, than in the u.s. It could easily be a persons name so I guess that would have been passed if seen. EBA is also a comedic game which adds to its edge.

What is the opposite of 'fanny'?

TO the best of my knowledge over here it just means anything like jittery or fidgety. Like someone telling a kid who cant sit still to stop being so spastic. I would also refer to the playing of wario ware as spastic. Now that I realize it's unfortunate origins I understand why the problem but I don't think anyone actually associates the word with the condition over here.

As for fanny, yea it is a name and it only means butt or rump or bum. The sort of word you would use with a child when threatening a spanking. Far from harsh language.
______

That vested interest stated, I've got to say that the use of 'spastic' to mean 'worthless', 'stupid', 'broken' or 'sub-human' is offensive.

I agree that the word Fanny is not particularly offensive, but that wouldn't stop a newspaper jumping on the shock horror story and the game getting pulled before anyone was offended. My beef with this game was the rediculously long wait in getting a release over here.

As to the offensive word in Mario Party, it is not used in a derogatory was to describe a person or their performance (unlike the Mind Quiz game that was also pulled), it is used to describe the motion of a train as uncontrollable or having spasms which is pretty much a correct dictionary definition. Not saying that it's ok for them to use the word here, just explaining context.


What is the opposite of 'fanny'?

Aye, and a fair point it was too.

irritant wrote:
As to the offensive word... it is used to describe the motion of a train as uncontrollable or having spasms which is pretty much a correct dictionary definition. Not saying that it's ok for them to use the word here, just explaining context.

In that event, I'd not have an issue with the use of the word 'spastic'. I don't actually believe that is the case, but I'll give the benefit of the doubt.

Here's how the idea gets distorted though... here's a story... I love South Park's "Timmy!" - however, one of my (previous) workmates was so upset by the depiction of an actual disabled person on actual television that they decided to 'do something about it' with letter writing and much bluster. Of course, they asked for my input. Of course, my input was to stop cheering Timmy long enough to tell my all-too PC colleague to get a life.

Why? Because the corollary of their 'doing something about it' would either have been to pull the Timmy's character from the show (lovely, safe, invisible disabled person) or change the character into some simpering pity figure.

I then invited them to come and visit some of my new pals (with the dribbling and the spasticity and the making strange noises and the smiling and the playing)... guess who was a little too busy?

So, a case of lost in translational rush to shelves, bad Q&A depts or human error in a pressure cooker industry?.

headcasephil 16 Jul 2007 15:46
13/16
i was expecting something to happen to mario party 8 but not offencive content
if you have played it yet which i have as i got a copy there is bits which remind me of the playstation logo x triangle circle square on the train level if you got the game have a look for it

So, a case of lost in translational rush to shelves, bad Q&A depts or human error in a pressure cooker industry?.

don't tell spong, they think they're a videogames site. I'm on my cycle...

realvictory 16 Jul 2007 17:32
15/16
In this game, the word is accurate in its meaning, without intrinsically having to have an offensive meaning (because it has more than one meaning). If, on the other hand, it was a swear word, or something whose only meaning is only offensive, fair enough, but what I don't like is that they're telling the people who said the word what they meant by it, which isn't right. We're talking about a train, not about a person, therefore I don't see how cerebal palsy can even apply.

I find certain types of speech offensive, too, but I don't have the right to change the way people speak or what people say just because I personally happen to find it offensive. The point is, in this case, (a) it's subjective as to whether or not it is interpreted as being offensive (the word has more than one meaning), (b) it is not meant in an offensive way.

Still, they made sure that it would offend no one by recalling it, which is the best option, when you don't want to offend anyone.

Harry 29 Jul 2009 21:52
16/16
Hi all. Anger at lies lasts forever. Anger at truth can't last.
I am from Malawi and now teach English, give please true I wrote the following sentence: "Usa cash advances is one of the best sources for such a kind of loans."

With respect :), Harry.
Posting of new comments is now locked for this page.