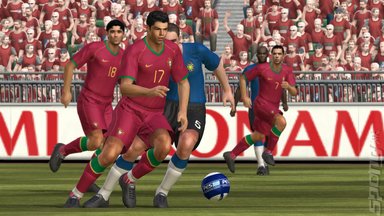 All Images (4) »
Konami has signed Cristiano Ronaldo, the fourth best footballer playing in England?, to be the face of Pro Evolution Soccer 2008 when the game hits Europe this summer.

Ronaldo is now charged with fronting the PES franchise against the might of Ronaldinho as the cheery Brazilian heads up FIFA '08 on the Wii.

Ronaldo, surprisingly, reckons PES is quite good. ?For me there is no other game that can capture the grace and skill of football like PES 2008,? he said. ?Every element of the game is lavished with incredible detail, and with its close control and fast pace it is the most complete simulation of real football out there.? Luckily for Ronaldo, SPOnG tends to agree.

Even more surprising is the fact that Konami rates Ronaldo, too. ?Cristiano Ronaldo is the most exciting talent in modern football,? commented Jon Murphy, Pro Evolution Soccer team leader. ?It is fitting that a player with his incredible skill and poise is to join forces with a game that can thrill and challenge as much as the real thing. His obvious enthusiasm for PES 2008 will be channeled into the game, and we look forward to working with Cristiano in the coming months.?

Speaking to Reuters Kazumi Kitaue, the head of Konami's North American and European operations indicated that he'd like to see deeper penetration into the American market with the PES franchise. "Our soccer game sales in the United States total a little fewer than 500,000 units. If we combine ours with EA's, that's going to be 2 to 3 million units. I believe, with proper preparation, we can bring our number to 1 million," he said.

Cast your eyes over the screens below to see what Ronaldo has in store for PES 2008, then head over to SPOnG's dedicated game page for more info and assets.