The Charts: Harry Potter, Nicole Kidman Go At It 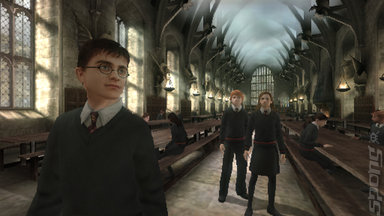 Harry always gets moody when its fish fingers day.
The ever-looming release of Harry Potter and the Order of the Phoenix in cinemas is still two days away, but Harry's still managing to get his feet under the table at the top of the All Formats Software Charts.

EA's Harry Potter and the Order of the Phoenix enjoys its second magical week at Number 1, managing a nifty 29% jump in sales. Harry and his band of magic vigilantes don't get to just kick back and enjoy their illegal activities, however. Nintendo's More Brain Training makes for strong competition, climbing three places from Number 5 to Number 2. It's like SPOnG always says: never underestimate the power of an aging Australian starlet in pushing a puzzle game. We say that all the time. Our mates hate it. In fact, More Brain Training outdoes its big brother, which peaked at Number 3 last year.

Activision's cross-platform Shrek the Third enjoys another week in the apt position of Number 3, aided and abetted by strong PS2 sales. In the PS2 chart Shrek's even knocked that Potter kid off the top spot.

2K's The Darkness slips a couple of spots this week, coming to rest at Number 4. We're pretty sure, however, that the PS3 release will use its phallic tentacles to drag the game back up a few places when it gets released later this month.

The Top 10's a veritable plurality of different publishers this week, with eight companies represented; Nintendo the only company to have more than one title up there, now there?s a thing.

There's only one new title in the All Formats Charts this week, and its Eidos' Ninja Gaiden: Sigma for the PS3. The game stealthily creeps in at Number 19 like a shadow in the night with a broken toe.

Well, shortly before I left Sydney... no, I shall say no more.