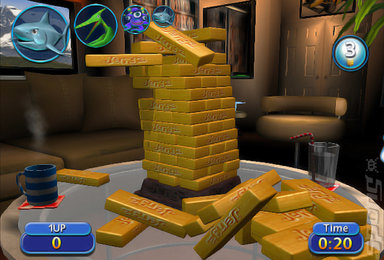 All Images (13) »
SPOnG was initially bemused upon hearing the news that Atari is to bring a videogame version of everybody?s wooden block-toppling favourite pub garden game, Jenga to Wii , PSP and DS later this year.

?Surely it can?t beat the fun of the real game? Isn?t that like a videogame version of Twister?? were the initial responses from cynical naysayers in the SPOnG office.

"Players of the Wii version can get physical with the Wii Remote and Nunchuk controllers as they battle to keep the Jenga tower from falling, while on the DS the touch screen provides equally intuitive control of the fast-paced action", Atari informs us.

Adam will get to play Jenga and talk to the producer at E3 this coming week, so we should really wait to hear what the deal is. Some clever, quirky power-ups (gravity-defying blocks, explodable blocks and so on) could well make all the difference to virtual Jenga.

Also watch out for hands on impressions, interviews and all the latest on Atari?s Godzilla: Unleashed (Wii, DS, PSP) and The Witcher (PC) (both pictured below) next week, along with (we hope) a few new announcements and surprises.